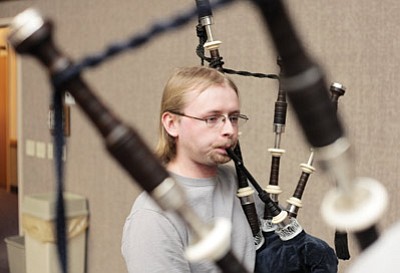 WILLIAMS, Ariz. -Playing the bagpipes is no easy feat. But members of Southwest Skye Pipes and Drums band are willing to teach anyone who wants to learn.

The nonprofit Southwest Skye Pipes and Drums band formed in Williams about five years ago. Depending on the event, the band has about 10 to 12 pipers and six to eight drummers from Williams, Prescott, Flagstaff, Sedona, Ash Fork and Camp Verde.

"You've got to be able to practice, put the time in, and put the money into the instrument," he said.

Students don't start out on the bagpipes right away. Instead they start learning on a bagpipe chanter. The musician uses the chanter to learn how to play the melodies, without worrying about the bag.

"It's a lot cheaper and it's a lot easier to play indoors," Donelson said.

Beginning students generally learn on the chanter for between six months and one year.

"You learn the tunes, you learn how to play music, and then eventually you'll get your own set of pipes," Grimes said.

Even experienced bagpipe players use chanters.

"You keep that practice chanter and you always use it to learn new tunes and everything," Donelson said. "That's what's unique about bagpipes. I believe it's the only instrument that has two separate instruments where you learn on one first before graduating to the second one."

Once a student has learned the tune on the practice chanter, they can switch to the bagpipes. On the bagpipes, students must coordinate playing the tune with squeezing the air from the bag with their left arm. Transitioning to the bagpipes can also be challenging for another reason.

"It's a totally different range of air that you need for being on the full set of pipes because it just takes that much more wind to get those things going," Donelson said.

"It's one of the greatest instruments ever made," he said. "You can be your own band and play by yourself because it's so loud."

Playing the bagpipes can also be peaceful, Grimes said.

"You've got to think about other things. You've got to clear your mind, you don't have the worries of the world. It's very relaxing to sit there and concentrate and it's a great stress reliever," he said. "And you're creative, you create things."

Southwest Skye Pipes and Drums band practices Tuesdays at 4 p.m. at the Mormon Church in Williams. More information about the band is available at southwestskyepipesdrums.webs.com.