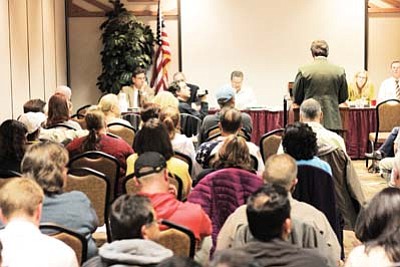 TUSAYAN, Ariz. - For Italian developers Stilo Group, progress on a proposed development in Tusayan is happening slowly but surely.

"We're closer to starting to think this could really work and that we could do some amazing things up here," Stilo representative Tom DePaolo said during a presentation to the Tusayan Town Council Feb. 6.

The Italian developer owns 375 acres in and around Tusayan, including Kotzin Ranch on the northwest end of town, Ten-X Ranch, located just outside the town's border and Camper Village, which is partially owned by the group. Stilo plans to develop the land for housing as well as other commercial buildings, including a dude ranch, hotels and cultural center.

The Tusayan Town Council approved the controversial development in November 2011, despite concerns from the Sierra Club, local business owners, the Havasupai Tribe and Grand Canyon National Park Superintendent Dave Uberuaga. The groups questioned the potential environmental effects and where the project's water will come from, which is something already scarce at the Grand Canyon.

Since then, the developers are working to meet all the necessary requirements expected of them by law. The big question of where the development might get their water remains unanswered, but Stilo recently identified some of their options at the Feb. 6 Tusayan Town Council meeting.

Stilo has the legal right to drill for groundwater in the Tusayan area, but that doesn't mean they're going to do it.

"It's legal, but it may not be the wisest decision for a variety of reasons," DePaolo said, adding the developer could spend the next 20 years in court if they propose it. "We do believe that groundwater withdrawal does have an effect on springs in the park," he said. "Our hydrologists have convinced us of that and we are trying to avoid that."

"We've spent an inordinate amount of time and energy and investment evaluating the feasibility of all of these," DePaolo said. "We're comfortable that they all will be economically viable."

Steve Rice, Grand Canyon National Park's hydrologist, said that if Stilo does decide to drill for water, the damages could be "pretty substantial."

"The way geology works around the Grand Canyon and Tusayan area, minor increases in groundwater use could end up with pretty major impacts to the small seeps and springs along the South Rim," Rice said.

Over time, drilling could shift the ground water divide that exists around Tusayan. That could completely shut off water that exists in certain springs. Reductions in flow over time could change a perennial reach to an intermittent one.

Rice said this poses big hazards to backcountry travelers who depend on those water sources, as well as plant and animals that need ground water at all times.

"They can't survive there anymore and can't travel from one spring to another just because of the harsh and dry nature between the sites," Rice said.

Because Stilo hasn't announced their plan of action, the Park Service has had to explore all potential options to best protect their water rights and resources within the Grand Canyon National Park.

Rice said more than likely, Stilo will look to obtain Colorado River water. Another option is drilling for groundwater either within the Tusayan area or farther south in the Valle area, something DePaolo said Stilo is trying to avoid.

"The one (option) that I've heard of is getting it from the Tubac, Arizona area where they can get it to the Santa Fe rail line rather efficiently," Rice said. "Then they could have it railed over to Williams at which point they could either send it up to Tusayan area by the rail that exists, or there's an old coal slurry pipeline that exists in the utility corridor that could be retrofitted to transmit water from Williams to the new development."

Both options could be complicated and expensive, Rice said. But if the interest and money is there, water is obtainable, "pretty much anywhere you want."

"If the economists deem it worthy, people will do some pretty remarkable things to get water," Rice said.

It's not just a matter of getting water into Tusayan, it's also about safely monitoring the wastewater.

Stilo owns nine operating biomass plants in Italy. DePaolo said they are the only plants in the world that accept and process human waste to convert into energy and Stilo is considering using the same kind of plant in town.

"It may in fact allow us to do some processing on site rather than trying to connect with the sanitary district, which probably would have to be expanded in order to accommodate what we're proposing regardless," DePaolo said. "We'll certainly see."

"They have the option to tie into our system and help pay for the upgrades, or they could do their own stand-alone systems at both locations," Shearer said. "We really don't have a preference because of the remote three miles to the Ten-X property, it probably isn't cost effective for us to have them to tie into us, so they'd probably do one there."

Shearer said the SRSD is "pretty much maxed out."

"We can take a few more hotel rooms and a few more apartments or trailers, but our system is at the limit of what it can handle," he said. "In 1995, we got a $4 million upgrade, and that's brought us up to date. So we've got plenty of capacity for the existing community."

If a major development takes place, the sanitary district can't accommodate the collections system and the water storage.

"So somebody has to come up with approximately $4.1 million by my calculations whichever way we go," Shearer said. "But we need to have more information from the developer. We can't just guess at the numbers of what the flow may be."

Shearer said what is critical is if Stilo plans on using reclaimed water. If they do, they don't have an excess of it and will need to upgrade their system.

"Some days we discharge zero gallons," he said. "And if we had more storage, there might be excess, but looking at the town park, and the possibility of having a ball field, that's going to take a substantial amount of water. We don't even have the reclaimed water to supply Stilo."

When the time comes, Shearer said the sanitary district will be involved with Stilo's wastewater management in a supervisory role.

"Because we are the Northern Arizona Council of Government's (NACOG) 208 Designated Management Agency, we would oversee their plan and make sure it's up to Arizona Department of Environmental Quality standard that provides proper treatment so we don't pollute the groundwater or the forest."

The Tusayan Forest Service needs to formally accept Stilo's Jan. 3 proposal for potential road construction on Forest Service land before Stilo can move forward. The developer also needs to provide a complete course of action plan, which includes a traffic and ecological study.

As part of this plan, DePaolo said the Forest Service wants to see community open houses and more public participation on Stilo's proposal.

Stilo also needs the Arizona Corporation Commission (ACC) to approve a Certificate of Convenience and Necessity (CC&N) for Ten X and Kotzin. The CC&N requires the developer to name an adequate water supply prior to the approval of any site plans.

Stilo has requested an extension on their CC&N three times. ACC Communication Director Rebecca Wilder said it's hard to know what will happen if Stilo can't come up with necessary answers by their latest deadline of June 1.

Wilder said each case is individual, and in some cases ACC will work with the company to achieve sufficiency, but they do set deadlines for a reason. She also said that it's common for companies to need an extension of time for any number of reasons.

"If this is a matter of insufficiency, then we can close the docket if the deadline isn't met, it's still possible that there is still some kind of circumstance where we could work with them," she said.