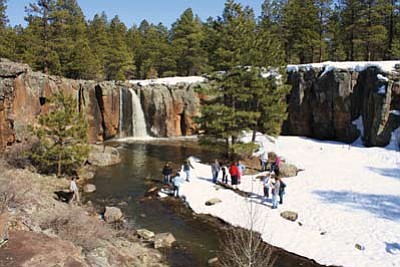 WILLIAMS, Ariz. - Archaeology comes alive on the Kaibab National Forest every Thursday evening and Saturday afternoon in March in Williams.

March is known as Arizona Archaeology and Heritage Awareness Month throughout all state parks. Many state parks put on unique activities and educational attractions for regional residents and not-from-the-area visitors.

The city of Williams and the Kaibab National Forest are no different. And for the first time, Café 326 will be the site for this year's Thursday evening lecture series. All lectures begin at 6:30 p.m. Café 326 is located at 326 W. Route 66 in Williams.

Williams and Tusayan Ranger District Archaeologist Neil Weintraub said the Arizona State Parks and the State Historic Preservation Office have offered Archaeology Month for as long as he can remember. Weintraub has worked on the Kaibab National Forest since 1990.

Arizona State Parks and the State Historic Preservation Office sponsor a full month of free activities every March for archaeology and history buffs of all ages.

In addition to the weekly lectures, every Saturday an official from the Kaibab National Forest will lead hikers to the Keyhole Sink Petroglyph site to take in the amazing, natural wonder of the earth. The hikes depart each Saturday at 2 p.m. from the Oak Hill Snow Play area, four miles west of Parks, Ariz. on the south side of Historic Route 66.

"Professional archaeologists get the public excited about the local archaeology of their area," said Weintraub. "All the different offerings and hikes all month throughout the state is amazing. You could go every day all month and see something new around the state."

The big event of the season is the Arizona Archaeology Expo March 16 at Horseshoe Ranch at the Agua Fria National Monument from 9 a.m. to 4 p.m. The Expo is free and open to the public. Kids can test their skills throwing "rabbit sticks," listen to cowboy songs and meet "Hualapai" the burro.

"The lecture series used to be at the district office, but this year we're moving it downtown, which I thought would be fun," Weintraub said. "Café 326 has a real nice setup for an informal slide show and lecture series. We're also hoping to see an increase in people attending because of the downtown setting."

Weintraub kicks off the lecture series March 7 with his presentation called the Williams and Tusayan Ranger District Heritage Accomplishment Report. This presentation will discuss the efforts that Kaibab archaeologists and partners took to protect, interpret and enhance prehistoric and historic archaeological sites on the Williams and Tusayan Ranger District during fiscal year 2012.

"The first 30-40 minutes is the talk and then the next 20-30 minutes is usually a question and answer period," Weintraub said. "The most fun part of this is we learn a lot of things from our audience and that's sort of what we're hoping for again."

"Margaret Hangan who works at the library has been collecting old historic Williams photos and surrounding areas," said Weintraub. "We want more people to share their photos because we can preserve those photos digitally now."

Weintraub returns March 21 for his second lecture, this one called Williams Area Historic Photo Re-Shoot Project. For the past decade, Williams Ranger District staff has been re-shooting historic photographs of the Williams area to document how the forest has changed.

Weintraub will compare and contrast these dramatic differences and will also discuss the local history that helped shape the current condition of the forest surrounding Williams.

"The lecture's geared towards history. We'll learn a lot more about local history. A pet project of mine is re-shooting these historic photos to compare and contrast the differences. Some of the changes can be really dramatic," Weintraub said. "I have a photo of Williams from Bill Williams Mountain from the 1890s, so I went up there to relocate the photo point and climbed up on the hillside and took a snapshot. I'm going to fade the pictures together so we can see all the differences."

Historian Robert Audretsch gives the final presentation of Archaeology Month on March 28. His lecture is entitled We Still Walk in Their Footprint: The Civilian Conservation Corps in Northern Arizona, 1933-1942.

Audretsch will discuss how the Civilian Conservation Corps (CCC), along with other New Deal agencies, was responsible for unprecedented federal land agency infrastructure growth in northern Arizona during the Great Depression.

These 44 CCC companies completed an astounding number of projects accomplishing as much as 50 years of work in less than 10 years. From the first reliable road from St. George, Utah to Wolf Hole, Ariz. to the rustic cabins of Hualapai Mountain Park at Kingman, to the Crown King Ranger Station to the Painted Desert Inn at Petrified Forest National Park, people today still walk in that CCC footprint.

Weintraub encourages those interested in the free Kaibab archaeologist led hikes to the Keyhole Sink Petroglyph site every Saturday to bring boots and warm clothing. It is a 1.5-mile hike roundtrip that will take place whether there is rain, snow or sun.

"At least one historian or archaeologist or interpreter will be on hand that can lead the hike," said Weintraub. "We all love going there though so it usually ends up being four or five of us."

Weintraub added hikers should be prepared to get wet as a waterfall often cascades off the lava flow requiring crossings in ankle deep water to access the petroglyphs. Hikers should call ahead for reservations as well. The lectures are wheelchair accessible, but the petroglyphs are not.

Hikers will meet in the Oak Hill Snow Play area parking lot prior to the day's hike to discuss etiquette. Petroglyphs are not to be touched, but plenty of photographs are encouraged.

"We'll also have a discussion about the natural environment as we hike down to Keyhole Sink. In some cases we'll have our civil culturist there to have him come talk about treatments alongside the trail and talk about some of the ways that we're trying to improve the health of the forest in that area," Weintraub said. "Periodically we'll have a wildlife biologist show up because there's a remarkable diversity of wildlife that uses Keyhole Sink. All these different components of the forest's history come into play."