Hand in hand for more than 50 years 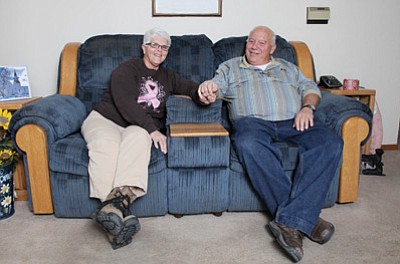 Barb and Bud Parenteau reflect on more than 50 years of marriage. Ryan Williams/WGCN

In Bud Parenteau's opinion, the way he met his wife Barb more than 50 years ago wasn't just a coincidence.

Although the two were both born in Freehold, New Jersey, they never met because Bud moved to Arizona when he was two years old. Years later when Bud joined the Navy, he got stationed in Pennsylvania and began to visit family in Freehold on the weekends.

"How else would that have happened? Some guy from New Jersey lived in Arizona and graduated high school out here, joined the Navy and wound up back in my home town," Bud said.

Thanks to a friendship between Bud's uncle and Barb's father, Bud went over to Barb's house for coffee after church one morning.

"The first time I met her she was coming down the stairs in her pajamas," he recalled.

"I had a bathrobe on," Barb added. "The worst of it was curlers in my hair."

Although Bud's aunt had wanted him to date Barb's sister, Bud and Barb started dating on weekends when Bud could come to New Jersey. A few months later, Bud found out he was going to be stationed in Iceland.

"It got closer and closer to me leaving and we were making all these plans about whenever I'd come back what we'd do and everything, and then about six weeks before I said, 'Let's get married,'" he said.

"There was no choice," Bud joked.

Ironically, about six months before, Bud had said he wasn't going to get married until he was 25 or 30 years old. But he ended up marrying at 20.

"It was just one of those things, she came down the stairs and that was it," he said.

Now, 50 years and five children later, the couple is still happily married. What's their secret to a lasting marriage?

Bud says doing things together is important. For example, the two are active in their church and with service organizations such as Habitat for Humanity.

Another important element is having a sense of humor, Barb said.

But talking things out is the key, according to Barb.

"Keep an open line of communication," she said. "And never go to bed mad at each other, no matter what."

Although the two got married after knowing each other for a short time, Barb said she loves Bud more now.

"You grow in love as the time goes on," she said.