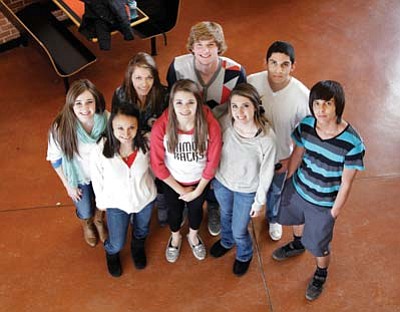 WILLIAMS, Ariz. - According to the old adage most people know far too well, all good things must come to an end.

And although all seniors wanted to win the final home game of their high school careers, the outcome would not change the fact that it was the last time they played in the WHS gym in front of their home crowd wearing their Vikings uniform.

Brownlee has played basketball all four years of high school, considers last year his best overall season, and said he feels fortunate and blessed to have been surrounded by so many amazing players and great coaches. He said one of the highlights of his playing days was dunking it in a game his junior year.

"Coach Red has really stepped up and done a great job with what he had," said Brownlee. "My favorite memory is probably messing with Principal Heisley honestly, that's one of the things that I'll miss the most. It's been amazing, I'm going to miss basketball a lot."

Brownlee said he hasn't picked a college yet, but he plans on going to school wherever he can continue to play football and study criminal justice.

Nunez has also played basketball all four years of high school. He said the last two years particularly have been amazing. His favorite memory of Vikings basketball is just hanging out with the team. He added that bus rides were especially fun.

"This year has been iffy at times, unfortunately we didn't have a great season, but it's really been amazing most of the time," Nunez said. "Our new coach treated us well too."

Nunez hasn't decided on a specific college yet, but said he plans to eventually attend a university to study engineering.

Ortiz has played basketball for two years in high school and said he isn't able to pick just one specific favorite memory from his WHS basketball experience.

"I don't know if it was really that amazing for me because I'm not too good at basketball," Ortiz said. "But my teammates were great, it was fun to be around them all the time, and the coaches were pretty good too."

Ortiz hasn't chosen a college as of now, but said he plans to pick a good university somewhere and find something interesting to study.

Fadda, the exchange student known by his teammates and coaches as "Italy," was out of the country last week and unfortunately missed senior night. Fadda has been an invaluable contributor to the Vikings varsity basketball team all season and was sorely missed.

Pettit has played basketball since her freshman year of high school. Her sophomore year she won the Most Spirited Award for junior varsity, her junior season she won Most Valuable Player for varsity. Her love for the game has made Lady Vikings basketball such a great experience for her.

Pettit said she loves her teammates, past and present, and couldn't be more grateful for all her coaches, including Echeverria, long time assistant coach Edgar Brown, and her father.

"It's sad though losing teammates to graduation," said Pettit. "I've been playing varsity for three years so I've seen many girls leave before me. And now that I'm a senior all those girls are gone, it's a little different. But I love my team and how we have really grown together this season as a team."

Pettit said her favorite memory of WHS basketball was being able to play with all of the girls she played with over the years and the support she received from her family, friends and teammates. Pettit will attend Yavapai College in the fall where she hopes to possibly play softball. She said she would continue to play basketball recreationally when she has time.

Hernandez has played basketball all four years of high school and said her favorite experience was right when she started playing the game her freshman year and how much fun it was.

"I loved playing for Eche [coach Echeverria] these past three years, I'm going to miss him when I leave," Hernandez said. "The teammates I have are an amazing group of girls."

Hernandez's plans for the future include starting her higher education at Coconino Community College and then finishing her studies at the University of Arizona.

Girls' basketball manager Ivonne Aguilar was also honored on senior night. Echeverria said she has done a great job helping out the team all season.

There are three seniors on the WHS cheerleading roster: Bayleigh Preston, Crystal Heiser, and Cheyenne Lienhard.

All three cheerleaders have been cheering for four years and say their favorite sport to cheer for is football.

"Everyday has been a great memory, it's so much fun," said Preston, who plans to study nursing when she goes to college. She said her first choice would be the University of Arizona.

"My favorite memory is when we got to cheer in the U.S. Airways arena where the Suns play," said Lienhard. "We got to cheer on the girls and boys in there."

Lienhard said she will study nursing at NAU beginning next fall. She hopes to cheer for the Lumberjacks once she gets there.