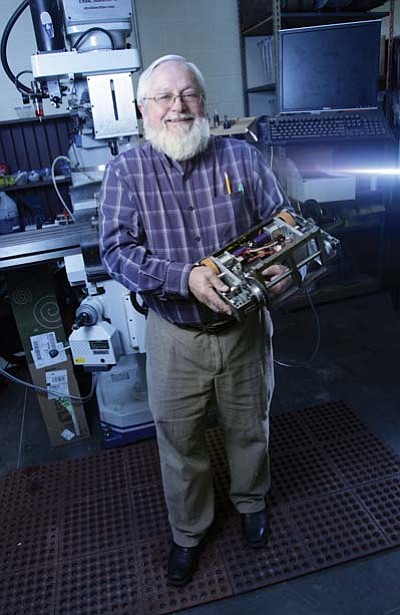 Larry Gutshall holds one of the BattleBots his students designed and built. Ryan Williams/WGCN

WILLIAMS, Ariz. - After more than 40 years of teaching, industrial arts teacher Larry Gutshall is retiring in June, or "hanging up my chalk" as he puts it.

Gutshall started teaching in Williams in 2003. At that time he was working as a project manager for a civil engineer. The Williams High School building that contains Gutshall's classroom was one of his projects.

"They needed a teacher and I wanted a place to be where I was with students again," he said.

Before he took the project manager job, Gutshall taught in Indiana for 4 1/2 years and in Buckeye, Ariz. for 26 1/2 years.

Gutshall, who has an industrial education degree from Purdue University, said his favorite part about teaching has been the students.

Gutshall's classes at WHS are electives that allow students to gain vocational or community college credits if they apply for them.

To generate student interest in the class, Gutshall incorporates the BattleBots program. The Arizona Tooling and Manufacturing Association supports the program.

"(The students) design (the robots) on the computer and then we cut the parts in here and we build them," Gutshall said.

The robots fight against other robots "in an attempt to incapacitate their opponent," according to BattleBots tournament rules.

Williams students have participated in the BattleBots program for seven years. In that time, Williams teams have won five state championships and one national championship in 2010.

"They do it as a way to learn all the buttons on the drafting programming. It's pretty extensive," Gutshall said. "The second year they start designing their own work."

Outside of his stint as a project manager, education has been a major part of Gutshall's life, both as a student and a teacher.

"It is with great regret and with a deep sense of loss on behalf of the district that we will let Mr. Gutshall retire," said school board president David Nenne.

Gutshall plans to stay in Williams for his retirement. Along with his wife Carol, Gutshall hopes to spend more time fishing, traveling, working at his church and helping to take care of their seven grandchildren.