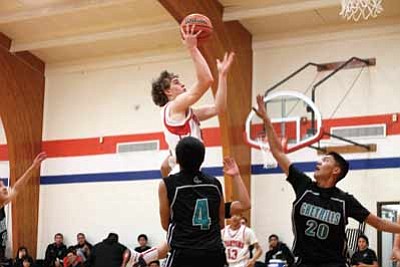 Junior swingman Ethan Berry elevates over his defenders for a two-pointer. Clara Beard/WGCN

GRAND CANYON, Ariz. - The Grand Canyon High School boys' and girls' varsity basketball teams both finished the regular season strong and head into sectionals looking to make some noise and possibly advance to the state tournament.

The Grand Canyon Phantoms made their impact felt on Jan. 28 at home by defeating the Northland Preparatory Academy Spartans (10-11) 72-58. The Phantoms closed the season with a senior night victory over the Greyhills Academy Fightin' Knights (2-20) 63-33 at home on Feb. 1. The Phantoms finish the regular season with a 15-3 record.

In an absolute nail-biter, the Grand Canyon Lady Phantoms lost their final game of the season 43-38 to Greyhills Academy (6-15) on Feb. 1 at home, which ended their seven-game winning streak.

Greyhills managed to outlast the Lady Phantoms in a back-and-forth game of wills that came down to the very end. Grand Canyon fought valiantly but ended up falling a mere five points short.

Prior to their final game on senior night, the Lady Phantoms easily handled the Northland Prep Lady Spartans (0-14), winning 52-31 at home Jan. 28, and systematically took care of business against the Shonto Prep Grizzlies with a dominating performance in their 49-21 win Jan. 31. The Lady Phantoms finish the regular season with a 12-8 record overall.

Against Northland Prep, the Grand Canyon boys' varsity basketball squad started slow, down nine points quickly in the first quarter, but rallied to take a small four-point lead by halftime to go up 33-29.

"We had to come from behind again and had to grind it out basically in the second half," said Phantoms head basketball coach David Beery. "It was a well-played basketball game by both teams."

Beery said the key to the spurt was defense. The Phantoms were able to string together a few stops, along with senior guard Loren Talas hitting a few big shots, which helped them quickly bridge the gap and then open up a large lead of their own.

Beery described the game as an extremely balanced team effort. Not one particular player played exceptionally well, but no one played poorly either. Beery did say that Talas had a great third quarter and Tyler Jones, the 6-4 sophomore forward, played very well in the varsity game against Northland Prep.

"Ricardo McCrary doesn't see a ton of varsity minutes as a senior, but he played really well," Beery said. "It was great to see that."

The Phantoms easily handled Greyhills, establishing the lead early and holding on for the 30-point victory. Talas and Bankston led Grand Canyon with 14 points each.

Beery said his team has done a pretty good job this season at working toward their goals, even though they are not quite finished yet.

"We wanted to improve continuously, so we'd be playing our best basketball at this time of the year," said Beery. "Last year we didn't have too high of expectations, but this year teams know that you're talented so we kind of had a target on our back. We've had to learn too, we've grown a lot. Hopefully the hard work pays off in the postseason."

The Phantoms play in the first round of the sectional tournament tonight at 7:30 p.m. against the Cibecue Wildcats (11-14) at Coconino High School in Flagstaff. If the Phantoms win they will play in the semifinals Friday.

"To make sectionals you have to win a fair amount, so there's not going to be any easy games at this point," Beery said. "What I've heard is they [Cibecue] move the ball pretty well and shoot the ball well. For us the focus needs to be on trying to play our style of basketball and our tempo. That way we're dictating what happens rather than reacting."