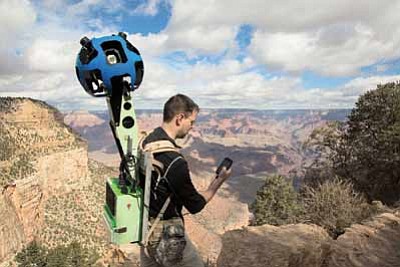 The Grand Canyon was the pilot venture for Trekker, a backpack-mounted camera system with 15 lenses that capture pictures every 2.5 seconds. Photo/Google

PHOENIX - Google Maps has taken Street View out of the city and veered into the Grand Canyon, adding 9,500 interactive panoramas of the landmark's winding trails and surrounding roads.

Users can now virtually hike twists and turns of the Bright Angel and South Kaibab trails, cross the Colorado River via Black Bridge and head into Phantom Ranch at the canyon bottom.

The imagery, available at www.maps.google.com/grandcanyon, covers more than 75 miles in and around the canyon. The collection also allows visitors to detour to Meteor Crater.

Google spokeswoman Deanna Yick said the additions are part of the search giant's goal of making a map of the world that's as comprehensive, accurate and easy-to-use as possible.

The Grand Canyon was the pilot venture for Trekker, a backpack-mounted camera system with 15 lenses that capture pictures every 2.5 seconds. An operator carrying the 40-pound device controls it via an Android-powered application.

"We really felt like the trails and the terrain and navigating the footpaths of the Grand Canyon were really the perfect place to see if the Trekker would work and bring the imagery online," Yick said.

Now, people who aren't able to visit the popular tourist site can experience the views and explore the canyon's geological history, and those planning trips can get a preview online, she said.

Grand Canyon National Park spokeswoman Maureen Oltrogge said the imagery may be helpful for hikers when used in combination with other sources of information. That includes learning about the dangers of extreme weather and how much food and water to bring, she said.

"As a tool it can be useful, but not as a stand-alone tool," Oltrogge said.

The number of people hiking below the rim ranges from 1,500 to more than 2,000 a day depending on the season, she said.

Pam Foti, professor of geography, planning and recreation at Northern Arizona University, said the imagery is good for providing a clear picture of the terrain but could potentially mislead hikers.

"The terrains, regardless of what they look like on the map, are challenging," Foti said.

Yick said the images aren't meant to be relied on solely when users are planning a trip to the area.

"We just wanted to be able to at least have imagery for people to experience and get a sense of what this place is like," she said.

Despite her concerns, Foti called the imagery "pretty incredible."