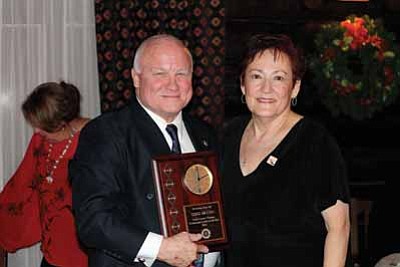 Rotarian Clarinda Vail said Bryan has served on many committees in the area. She noted that Bryan's leadership during the government shutdown cemented Rotary's choice in naming the mayor the community leader of the year.

"I just know how many hours Greg puts in above his regular day job. He travels on weekends, he travels on days off, he uses his vacation time, he uses a tremendous amount of his personal time to support this community," said Clayann Cook, Rotary member and manager of Big E Steakhouse. "When he steps down from his position, I think his presence is going to be very missed, because he's just an incredible leader and he's been that way since I've been at the Canyon in 2002. I've always admired what he does for the community."

Rotarian Yvonne Trujillo echoed Cook's sentiment, and said that besides being instrumental in supporting Tusayan during the government shutdown, Bryan has always been a cornerstone of the community.

"I've always felt that he's been a good friend to all of us," Trujillo said. "This year it was very obvious from the start that we had one person that was the epitome of our requirements of a leader."

Bryan said he was "surprised, humbled and honored" when he heard he was the award recipient, and thanked Rotary on the Rim for the distinction.

"Knowing the people that have received the honor in the past, I feel humbled to be a part of that group. It leaves me speechless, which is hard to do," he said.

Looking to next year, Bryan said one of his main goals is to move closer to having affordable housing for Tusayan residents.

Bryan has lived in Tusayan for 14 years and is the general manager of the Best Western Premier Grand Canyon Squire Inn. He was appointed to Tusayan's first Town Council and served as vice mayor and financial officer until becoming mayor in November 2010. He served as chairman of the Tusayan Incorporation Task Force, which studied the pros and cons of incorporation prior to the community vote on it and has served on the Grand Canyon Chamber/Visitor's Bureau and the Grand Canyon Rotary Club Board of Directors. Prior to coming to Tusayan, Bryan lived and worked in a number of destination resort communities such Whitefish, Mont; Kaanapalii Beach, Maui, Hawaii; South Lake Tahoe, Calif; and Sun Valley, Idaho. He has had his own property management/consulting business, as well as owning and managing restaurants and bars.

He met and married his wife Judy at the Grand Canyon and has two grown daughters living in Whitefish, Mont. He enjoys hiking in the Canyon, golf and martial arts.