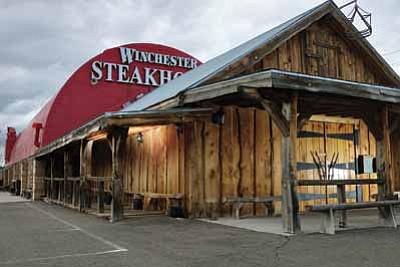 WILLIAMS, Ariz. - Six years after the Grand Canyon Brewing Company opened on Route 66, the company is ready to expand operations by moving to the Winchester property at 301 N. Seventh St.

The sale was finalized Dec. 16. It came after the Williams City Council adopted an ordinance adding "microbrewery" to the city zoning code at its Dec. 12 meeting. The Williams Planning and Zoning Commission voted to recommend the addition to the council at its Nov. 21 meeting. The brewery also got clearance from the Arizona Department of Liquor Licenses and Control before the new location was finalized.

Grand Canyon Brewing Company's current location at 233 W. Route 66 is about 6,500 square feet. The new location will provide about 18,000 square feet, not including plans for an addition, said John Peasley one of the brewery's owners.

"We're unable to keep up with production across the board," he said about the reason for the move. "We'll expect about 50 percent growth just by opening next year a new facility that has the ability to produce the beer we need, solely on orders we currently have."

The brewery owners are now in the planning phases of renovating the Winchester. According to Peasley, the whole process will cost $1.6 million dollars, of which $1 million will go toward the acquisition of the property and an expansion of the building and $600,000 will go toward buying brewing supplies.

"We're going to have brand new equipment and a new facility built for a microbrewery," he said.

The downstairs of the Winchester will be remodeled to include a tasting room and bar with pool tables and a gift shop. Tours of the brewery will be available at the new location. The upstairs will contain office space for Grand Canyon Brewing Company employees.

Peasley also plans to remodel the kitchen to allow for serving food at some point in the future.

Peasley expects to see some initial plans for the renovation and addition within the next week and a half. He hopes to break ground within six to eight weeks, with about 8-10 weeks of renovations.

The brewery's current location behind Cruisers Cafe will become a pub with a sports bar theme. While some of the brewing equipment will be relocated to the new location, the rest will be moved to the back of the building, making room for the bar.

"We will still make beer at the existing location," Peasley said. "All of our production will be at the new facility. All the basically one off styles of beer, the unique stuff we're wanting to bring into the market or test, will be made at that facility behind Cruisers."

Peasley estimates the new location will add at least 10 jobs, including bartenders, brewers, and gift shop workers. The tasting room will be seasonal. The existing location, which will become the pub, will add about six jobs.

Besides distributing beer throughout the state, Grand Canyon Brewing Company also distributes in Nevada. Peasley hopes to expand distribution to southern California in the future.

"Last year we had about a million bottles that went out all saying 'brewed and bottled in Williams, Ariz.'" he said. "But not only that on the back of the label it's got the story talking about the downtown area of Williams. So that always helps."

Currently, Peasley said Grand Canyon Brewing Company is about third in the state as far as beer production goes. He hopes the new location will allow the brewery to move up to the number two spot.

"There's a lot of us fighting for that position," he said. "The beer market in Arizona is definitely growing. But there's room for us to take the lead if we want it."