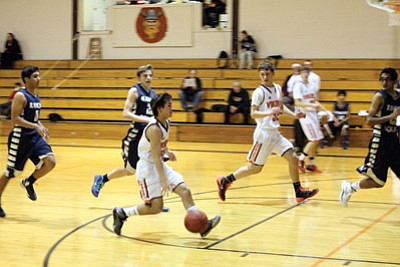 Head coach Rico Dunn said despite the win against Ash Fork, the Vikings had a hard time shooting well. The team's average shooting from inside the arc was 40 percent and beyond the arc was 41 percent. The team shot 33 percent from the free-throw line. But some players stood out.

"We had big nights from Austin Kennelly and Colton Grantham and Leo Lopez also put up some serious points," Dunn said. "Key nights from those guys."

Christian Plasencia missed this game, as well. Dunn said the Vikings struggled defensively, dropping down to their opponents' level when he knew the Vikings could play better.

"That's my job to get them amped up for the game. It just wasn't successful on that night. We played ugly for a little bit and then we kind of started pulling it together and walked away with it a little bit late," Dunn said. "In the future, I would like us to put away teams that shouldn't be hanging with us a lot sooner."

Against Rancho Solano, Dunn said the Vikings made more of an effort even though the game was not as pretty as he would have liked.

"The problem we had with that game is that Rancho brought nine guys with them and the majority of their team played junior varsity as well so a lot of our guys got to see what they were going to be about," Dunn said.

As a result, it took awhile for the Vikings to get ready to go. Dunn said his players were dead in pre-game warm-ups.

"I threw out my guys and they got us a lead and then we handed it over to the young guys who had already proven they could handle these guys," Dunn said.