For Williams resident Larry Pittenger life is one big drag 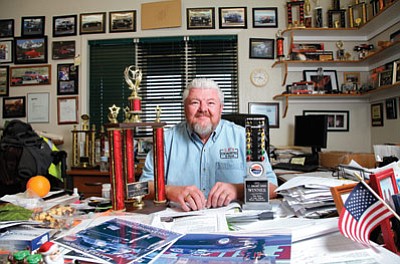 Local drag racer Larry Pittenger sits in his office at L.P.’s Excavating amid his collection of racing trophies and photos. Ryan Williams/WGCN

The closure of two racetracks in Phoenix in 2012 couldn't keep local drag racer Larry Pittenger from getting behind the wheel.

Instead Pittenger traveled to a track in Las Vegas, where he became the 2013 Calvert Racing Street Muscle Champion after earning the most points during his drag racing season.

At the end of the season, Pittenger had earned 570 points, while the second place finisher earned 410 points.

Racers earn 50 points for entering an event and successfully passing a technical inspection, 20 points for each round entered, and 20 points for winning an event. The points are totaled using the best three race point totals out of four events, according to the organization's website.

Pittenger raced in three of the races in the series in Las Vegas and did not attend the fourth race in California.

Pittenger's road to the championship started on Feb. 10 when he finished third in a race in the Pacific Street Car Association (PSCA) Street Muscle Class.

Then in April, Pittenger finished first in another PSCA Street Muscle Class race.

In the last race of the series on Oct. 6, Pittenger finished first again in the PSCA Street Muscle Class to give him the 570-point total.

"That's probably my biggest accomplishment in the six years I've been back racing," Pittenger said.

This season was Pittenger's first time racing in the PCSA.

"I was the new boy there so I had to show them what I was made of," Pittenger said.

After winning his first few races, Pittenger said "the boys in Vegas started taking me serious. They wanted to know where did I come from."

Currently, Pittenger races a 1968 Camaro. The car usually takes about 10.30 seconds to complete a race, traveling at 131 miles per hour.

In drag racing, the cars start at different times depending on how fast they are to make the race fair. After completing a few time trials, a driver "dials in" the time it takes to run the quarter-mile track. A column of lights called a Christmas tree tells the drivers when to start. Starting from the top, three yellow lights flash before the green starts the race. A red light at the bottom lights up if the driver leaves too early, which disqualifies them. If the driver finishes the race faster than their dial in time, they are also disqualified.

A perfect start in drag racing is 0.000, meaning the driver started the race exactly when the green light came on.

"It's actually the hardest game I've ever played," Pittenger said. "Personally you gotta be on your game, you've gotta have the car on its game, and you gotta make sure it keeps running."

Other highlights from Pittenger's race season included winning two races in the Summit E.T. Bracket Series, finishing fourth out of 80 drivers at a race in Boise, Idaho and finishing third in his class at a race in Seattle, Ore.

Pittenger also won another event with the PSCA this season, the Triple Index, in which drivers could only choose one of three dial in times: 10.60, 11.60 or 12.60.

"I had a fantastic year," Pittenger said.

The race season is over for now, but Pittenger is already looking forward to next season, which starts in February.