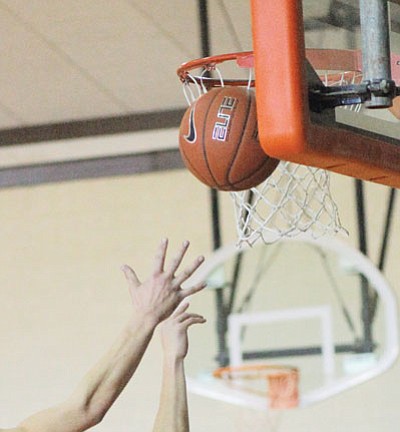 Against the El Capitan Eagles, the Phantoms got off to a promising start and led 23-13 after the first quarter, but struggled when El Capitan started to pressure the GC guards.

Head coach Dave Beery said the move dazed his team's offense causing the Eagles to force  21 turnovers during the game.

"We played hard and competed but couldn't execute against their aggressive man-to-man defense," Beery said. "Micah Barlow and Allen Bistline, who are two of the top guards in our section,  had 19 and 12 points for the El Capitan Eagles."

Grand Canyon, Senior Joey Bankston led the way with 24 points and 11 rebounds but was forced out of his usual post position and took over point guard duties as the Phantoms struggled to handle the basketball.  In the third quarter, El Capitan pulled away, outscoring Grand Canyon 25-12.

"Against El Capitan, the Phantoms really missed the ball handling, physicality, and leadership of senior guard Ethan Berry who was serving a  one game suspension, in what was a very intense environment," Beery said.

The next day against Fredonia, the Phantoms took control early and led 23-7 after the first quarter.  Senior Ethan Berry, returning from his suspension, hit a deep three pointer to start the game and sunk 12 points in just 19 minutes.

Beery said this time around, the Phantoms didn't let up and led the entire game with a 41-12 point lead at halftime.

The junior varsity boys, led by Jaru Velazquez, Ian Jones and Alex Thompson, picked up their first win of the season against Fredonia.

"Overall I was encouraged by the boys' growth towards truly being a cohesive team on this road trip which included being stranded in Page overnight after the Fredonia game," Beery said.

The varsity girls basketball team lost against El Capitan, 34-20. The Lady Phantom's top scorers were Tateyonna Jeter and Deya Ramos with six points each, and Yesenia Jiminez with three points.

The next day, the girls struggled against Fredonia, losing with a final score of 39-27.

"The girls will  have their work cut out for them this week when they go to the Pepsi Tournament in Flagstaff," said Tami Legaspi, volunteer assistant coach.

At the tourney, the Lady Phantoms' first game will be tomorrow at 8:30 p.m. against Mesa. The next home game will be Dec. 20 against Seligman.