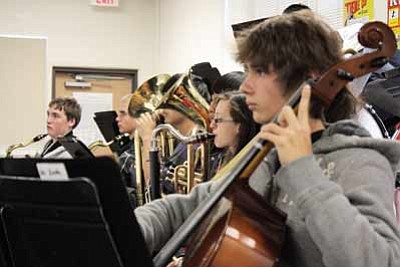 TUSAYAN, Ariz. - On Dec. 19 at Tusayan's Big E Steakhouse, Grand Canyon School (GCS) band students will take the stage for a jam-packed evening of music. The show starts at 7 p.m., and includes a variety of band performances from sixth through 12 grade, concluding with the rousing Beethoven's Fifth Symphony, First Movement.

"That piece of music is a beast, and I threw it at them to see if they could rise to the challenge, and they've risen to it and above," GCS music teacher Bentley Monk said. "They've pushed me musically this year as well as themselves."

Before performing some combined pieces with the high school band, the sixth grade will play a medley of Jolly Old Saint Nick tunes, the sixth grade even wrote out song transitions themselves.

"I'm pretty proud of them for that," Monk said. "This is a beginning band, and have only been playing since August."

Monk said all of his young musicians have stepped up to a new level, and the results have been impressive.

The band will play three different pieces and finish with "It's a Small World Prelude," which Monk said is so good, it sounds like just like being on the Disney ride.