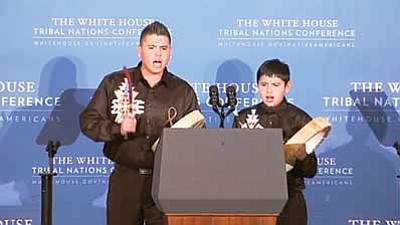 Tribal drummers sing at the White House Tribal Nations Conference. The conference brings Native American leaders from across the nation to Washington to hear from adminstration officials. The event, now in its fifth year, was a promise President Barack Obama made in his first campaign for the White House. Ashley Shumway/Cronkite News

"Already, many of your lands have felt the impacts of a changing climate, including more extreme flooding and droughts," Obama said at the conclusion of the fifth annual White House Tribal Nations Conference, which featured wide-ranging speeches by the president and many of his Cabinet members.

But Navajo Nation President Ben Shelly said he worries that clean-air rules being planned by the administration could cost considerable revenue and jobs if power plants on the nation's lands are partially shut down because they emit too much carbon dioxide.

"Give us a transition period," said Shelly, one of the hundreds of officials at the one-day conference. "We are producing energy and revenue for ourselves and our jobs. You cannot just shut us off and say you can't burn coal."

Clean air was just one of the topics at the event, which featured presentations from a number of agency heads and Cabinet officials, including secretaries of Justice, Veterans Affairs, Transportation and Health and Human Services.

But much of the discussion involving Arizona tribes centered on environmental threats.

Energy Secretary Ernest Moniz and Environmental Protection Agency (EPA) Administrator Gina McCarthy both said the Navajo Nation faces a water shortage if climate change continues to aggravate extreme droughts. McCarthy called climate change "the most challenging public health issue of our time" in her speech at the Department of the Interior.

"Southwestern tribes like the Navajo see severe droughts affecting their water supply, their agriculture, their ability to be sustainable," McCarthy said.

Moniz called for more renewable energy, saying climate change has already led to decreased river flows that have affected about 100 tribes that depend on hydroelectric power from the Hoover and Glen Canyon dams. Even the two coal-fired power plants on the Navajo Nation could be affected if there is not enough water to operate them, Moniz said.

Shelly said it is important to keep those plants - the Navajo Generating Station and the Four Corners Power Plant - open, but that the EPA needs to work with the tribe to make sure upcoming regulations do not curtail production at the plants or shut them down altogether.

The EPA is scheduled to propose new carbon-emissions limits in June 2014, and Shelly said the tribe is willing to work with the agency to invest in renewable energy and in carbon-capture technology that would eventually make the plants cleaner. But the Navajo should be given three to four years to implement technology to clean up its coal-fired plants, he said.

Other members of Obama's Cabinet touched on a variety of topics at the event, including health care, domestic violence and transportation.

Health and Human Services Secretary Kathleen Sebelius said about a third of Native Americans do not have health insurance, which is why the Affordable Care Act could be especially beneficial to them.

"In spite of the issues that have plagued the (health exchange) website for the past six weeks, it is getting significantly better," Sebelius said.

Attorney General Eric Holder praised this year's reauthorization of the Violence Against Women Act, which expanded the law to include new provisions to protect Native American women living on tribal land.

And Transportation Secretary Anthony Foxx emphasized the need to improve infrastructure on reservations, "connecting every person on these shores to 21st-century opportunities."

In addition to talking policy, Obama took time in his speech to praise Native Americans for their contributions to the country, particularly through the military. He mentioned the Navajo Code Talkers in World War II and Lori Piestewa - a Hopi who he said was the first Native American woman to die in combat as a member of the armed services - as examples of great Native American veterans.