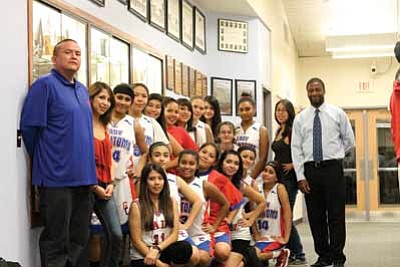 "NPA looked ready to play, our boys looked like it was our first game," head coach Dave Beery said. "We didn't execute well, especially on the defensive end. We also didn't knock down open shots."

The Phantoms sunk three shots out of 19 attempts from the three-point line, but NPA managed to surpass that with 11 successful shots out of 22 tries.

Beery said those numbers made a huge difference in the outcome of the game.

"NPA also passed the ball very well and were patient enough to get wide open shots," he said. "We knew their guards could shoot, but they really shared the basketball and my hat goes off to NPA. Coach Ramirez really had them prepared."

The Phantoms play rival school El Capitan away on Friday, where they'll be without senior captain Berry. Officials ejected Berry in the fourth quarter of the NPA game after he received a technical foul. The team takes on Fredonia Dec. 7.

In their first game on Nov. 28, the Lady Phantoms lost a hard fought battle against Northland Preparatory Academy with a score of 51-42.

"The girls started slow but by the end of the game they were working together and playing well," said Tami Legaspi, volunteer assistant coach for the team.

The junior varsity girls won their game, 17-16, thanks to Dugi and Kiana Wadsworth making their free throws.

"All the girls played really well, four of which had never played high school basketball," Legaspi said. "Top scorer was Tina Dugi with eight points and Kiana Wadsworth with four."

But looking ahead in the season, the team has their sights set on making it to sectional championships and beyond.

"That is a big goal, for myself and for the players," head coach Markale Hall said. "I want to encourage them to do their best every time they step out onto this court."

Because the team lost three seniors, Morgan Timeche, Cori Yazzie and Katrina Haswood, this season's 17-player roster is made up of predominately sophomores. Two freshman, two juniors and five seniors round out the team, with three girls playing both junior varsity and varsity.

Legaspi said seniors Tateyona Jeter, Shanaya Upshaw, Jessica VanInwagen and Shanya Smith are some of the players to watch this season.

"Tateyona is good at being down at the other end of the court, being there and making shots," Legaspi said.

Preseason conditioning was a priority for the young team, which tended to fizzle out toward the second half of the game last season.

"We've been running really hard, lots of suicides, just trying to get them ready so they're good through the whole game and not just the first half," Legaspi said.

Because the schedule has changed significantly from last season, many schools will be new to the Phantoms, but they're still looking forward to being matched up against Seligman on Dec. 20 and Jan. 4, a team touted as one of their rivals.

"We're venturing out more, we're playing St. Michael's who we've never played, so that'll be a new challenge for us," Hall said. "We don't know what to expect, but we're looking forward to playing an awesome game each time."