Food donations down by half at Williams food bank 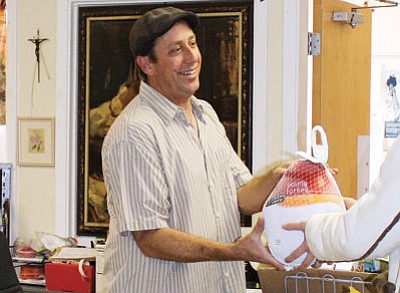 Williams Food Bank director Guy Mikkelsen helps a customer check out at the food bank. Donations are down by 50 percent from this time last year. Marissa Freireich/WGCN

With the Williams Food Bank more than halfway through its annual holiday food drive, food donations are currently down about 50 percent compared to last year at this time.

The food bank had enough supplies to distribute Thanksgiving food boxes to a record 330 families this year, but now more donations are needed with Christmas right around the corner.

The local food drive started the last week of October and will continue through Christmas. Food donation bins are located at Safeway, National Bank of Arizona, Family Dollar and Dollar General. Williams students have also organized a food drive at school.

Food Bank director Guy Mikkelsen guessed that the slow growth of the economy paired with the government shutdown in October may have contributed to the record number of clients he saw for Thanksgiving this year.

"I think even regular families are trying to save where they can to get by," he said. "It doesn't help a huge amount but it does help a little."

Mikkelsen said he used about $4,000 of food bank donation money to make sure he'd have all of the food he needed for the Thanksgiving boxes.

Those boxes included a 14-pound turkey, boxes of mashed potatoes and stuffing, canned fruit and vegetables, condiments and drinks. The boxes also included items like rice, beans and noodles that families could use before and after the holiday.

"It turned into a pretty good amount of stuff, and hopefully everything (they needed) to have the holiday meal," Mikkelsen said.

With Thanksgiving behind him, Mikkelsen's next hurdle is Christmas. He expects about 200 to 250 families will need boxes at Christmas this year.

But the food drive isn't just important for the holidays. It also generates enough food at the Food Bank to hopefully last Mikkelsen through the winter.

"After Christmas everything kind of drops off quite a bit. People's donations to even the big food banks drop off so then they can't turn around and then give us as much," Mikkelsen said. "So this is really that critical time where we just collect as much as we can to try to make it through until the spring where Easter and some of those things start getting people back interested in donating to the food bank system."

Any non-perishable food items are needed for the food drive, especially food with protein. Mikkelsen added that Safeway has ready-made food bags available to buy at the cash register for $10, which is an easy way to donate to the food drive.

"When we're blessed enough to have a little extra to give, I think we ought to, because it could be us in that position some day," Mikkelsen said. "It's more than a donation - it shows people that need it that there's somebody out there that cares about them. I think that's as sustaining as the food. But we also all need to eat. That hunger - it's a bad feeling."