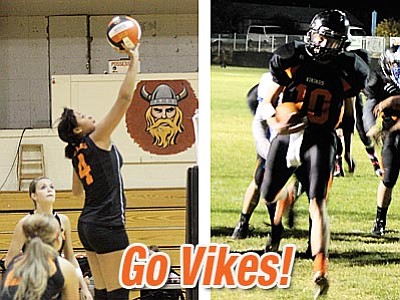 The Lady Vikes volleyball team will scrimmage Scottsdale Christian Academy at 3 p.m. on Friday. The football scrimmage begins at 5 p.m. with the Vikes taking on Scottsdale and Tonapah Valley in a three-way scrimmage.

The fall sports season is underway at Williams High School with the Lady Vikings volleyball team and Vikings Football team both practicing in preparation for Friday's scrimmage at home against Scottsdale Christian.

Williams High School Athletic Director Phillip Echeverria said numbers for both teams are about the same as last season. About 22 students will play on the volleyball team and 28 athletes will take the field playing football.

"We'd like to see those numbers be five to 10 higher, especially football," Echeverria said. "We can't force kids to play. So you just have to get the kids that want to be out there. It's the commitment and time and some of them are just unable to do that. So, it's not a bad thing. I'm excited for a new year."

"There should be some excitement in the air," Echeverria said. "Scottsdale Christian is a division above us in some sports. They double us numbers-wise. They are somewhere around 400. It will be exciting to have a lot of people there."

"That's for everything," Echeverria said. "For two seasons. For all the football, volleyball and basketball. It's a pretty good deal."

"We named it after him. He started it 24 years ago," Echeverria said.