Ninth annual Thunder over the Coconino airshow this weekend in Valle 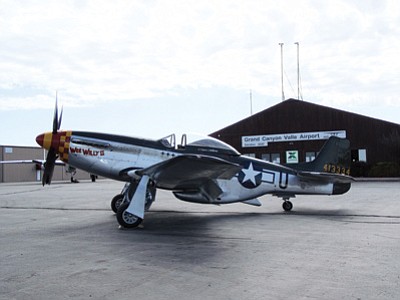 One of the many airplanes available for viewing at the ninth annual Thunder Over the Coconino fly-in Aug. 24. Submitted photo

VALLE, Ariz. -Aviation enthusiasts won't want to miss the ninth annual Thunder Over the Coconino fly-in and celebration of historic aircraft and automobiles. The event has been known to attract around 2,000-3,000 people from all over the world.

Called "one of northern Arizona's premier aviation events," this year's event will be at the Valle Airport Aug. 24 from 8 a.m. to 3 p.m. Tickets are $12 for adults and $6 for children with a $30 maximum family entry fee. Officials with the Valle Airport, the local Experimental Aircraft Association Chapter 856, and the Valle Planes of Fame Museum organized the event.

For those who arrive hungry, a pancake breakfast is offered from 6:30 a.m. to 10 a.m., and fireworks, said to be the best in northern Arizona, will wrap up the day at 9 p.m.

"We have an army encampment, that will be doing a show around 10 a.m.," organizer Molly Harris said.

This year's featured speakers, the Tuskegee Airmen, will present a talk around 11 a.m. in the airport hangar. According to their website, www.Tuskegeeairmen.org, "'Tuskegee Airmen' refers to the men and women, African-Americans and Caucasians, who were involved in the so-called 'Tuskegee Experience', the Army Air Corps program to train African Americans to fly and maintain combat aircraft. The Tuskegee Airmen included pilots, navigators, bombardiers, maintenance and support staff, instructors, and all the personnel who kept the planes in the air."

"They were here last year and everyone really enjoys them," Harris said.

Rides aboard the historic P-51 Mustang aircraft will also be available during the event along with rides aboard the Ford Tri-Motor N414H. Fees for flights are separate from the event entry fee and range in price from $50 up to $750. Besides aircraft, other treats will also be on hand for those who attend the Thunder Over the Coconino event.

The local EAA Chapter 856 will be offering free rides for children as part of the Young Eagle introduction to aviation program. Other aircraft will arrive during the event and perform throughout the day and be on static display. The Planes of Fame museum collection will also be available for viewing with admission.

In conjunction with the fly-in, new Valle store, "Off Route 66," will display its own personal classic and vintage cars as part of its grand opening.

"We just opened a month ago," owner Lorraine Collins said. "It's everything 1958 related. Elvis, Betty Boop, that kind of thing."

Included in the event admission fee is free entry to the famous Planes of Fame Air Museum, located at Valle Airport. The museum houses a collection of antiques, warbirds and homebuilts, including "Bataan," the Lockheed C-121A Constellation that once served as General Douglas MacArthur's personal transport plane.

"A General MacArthur impersonator will be giving tours and photo-ops at the plane," Harris said.

This northern Arizona aviation event will feature among other unique airplanes, the 1929 Ford Tri-Motor N414H, which is housed at Valle Airport.

"We are the premier northern Arizona aviation event," Harris said. "A lot of fly-ins and shows across the country are being canceled so there's not many more of us left."

Valle Airport (40G) is just 25 miles south of Grand Canyon National Park located at the junction of SR 64 and US 180 (32 miles north of Interstate 40 and Old Route 66). Valle Airport is on the main road to Grand Canyon's South Rim-the scenic heart of the canyon, and includes not only the deepest part of the canyon, but the majestic grandeur of one of the Natural Wonders of the World.

More information is available at www.valleairport.com. Gobeil can be contacted at (928) 635-5280.