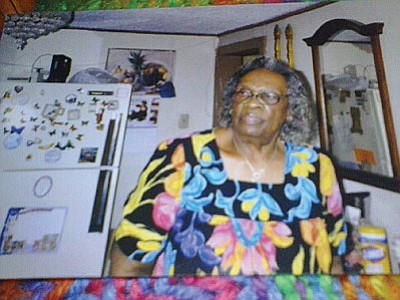 Lucille Nelson answered her Lord's call to return to his heavenly home August 15, 2013 at 12:22 p.m. surrounded by loving family members in the comfort of her own home. She was 86 years old.

Lucille was born on June 4, 1927 to the late Monroe and Affie Singleton. She moved to Williams, Ariz. from Dodson, La. with her late husband John Douglas Nelson and family. She immediately set up house for her family and continued her job as a master chef and baker professionally, which she carried out for over 50 years in many restaurants in Williams. "Ludy" as she was affectionately called by many, was an avid fisher; no one enjoyed fishing as much as she did. She was also a very talented seamstress and could mend or make many different types of apparel. In Williams she enjoyed going to the Senior Community Center to visit all of her friends. One of the highlights of her week was getting dressed up and attending the service at the Galilee Baptist Church.

What truly made her special was how much she meant to people that knew her. Lucille was such a strong woman physically, mentally, morally, and religiously, possessing the highest character beyond reproach in her role as a mother, grandmother, great-grandmother, cousin, friend, and neighbor. All that knew her were inspired by her unconditional love and all seven of her children and her many grandchildren learned so much in life from Grandma Nelson. She touched many lives and whenever she visited her home state of Louisiana people spread the word like wildfire that "cousin Ludy" was home. If you found a crowd she would be in the middle, as people loved her and she loved them equally. Lucille loved the Lord Jesus Christ, her family, her country, and Williams, Ariz.

The funeral arrangements are being cared for by Norvel Owens Mortuary and the service is scheduled to begin at 2 p.m. Saturday August 31, 2013 at First Southern Baptist Church, 629 W. Grant Av., Williams, Ariz. Visitation will be held two hours prior to the service. The concluding service and interment will immediately follow at the Williams Cemetery in Williams, Ariz.. Lucille's family is grateful for those who have expressed their sympathy and appreciate all of the prayers offered on their behalf during this difficult time.