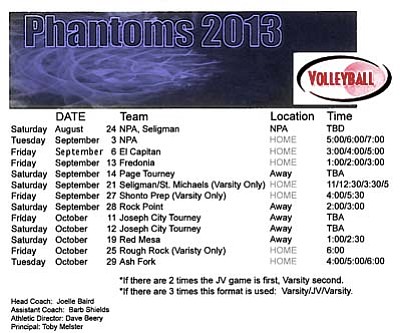 Newcomer Kaitlyn Russell will lead the Phantoms soccer team in what will be her first year as head coach for GCHS. Russell, who also teaches at GCHS, brings quite a bit of experience as a player to her new position. Janet Ginder-Berchick is Russell's assistant coach.

Because of low attendance numbers at Grand Canyon School, girls are allowed on the Phantoms' soccer team. So far only one girl, sophomore Hannah Gaskins, is on the roster.

"We are returning a couple of key players, seniors Ethan Berry and Justin Jarrell," said Beery. "I don't know exactly how it's going to look yet since we've just recently started practices, but traditionally Justin's been a wing or an outside forward. And Berry played forward quite a bit last year as well, in more of a sweeper role."

The Phantoms' soccer team has five seniors and four juniors on the roster. These upperclassmen will lead their teammates on and off the field beginning in September.

The soccer team travels to Payson to take on the Payson Longhorns and Camp Verde Cowboys in a preseason scrimmage Aug. 31 at 2 p.m. The Phantoms open the regular season at home on Sept. 6 when they play host to the Northland Preparatory Academy (NPA) Spartans from Flagstaff at 4 p.m.

"Our volleyball team lost some good players too, so we'll be young this year but eager to play well and hopefully win some games," Beery said. "Some key returning seniors who will definitely contribute are Blythe McBroom, Jess Van Inwagen, and Tateyonna Jeter."

Along with the three seniors, six juniors add even more depth and experience to the Lady Phantoms' fall roster. Barb Shields will assist Baird on the sidelines this season.

On Sept. 3 the Lady Phantoms open the regular season at home when they play host to the NPA Lady Spartans in a double-header at 5 p.m. and 7 p.m. The junior varsity team plays at 6 p.m. in between varsity matches.

Also this fall, GCHS will play host to a three-on-three basketball tournament, according to Beery.