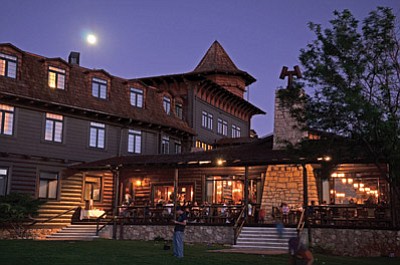 Two concessions contracts out for bid at Grand Canyon National Park cover 951 guest rooms, including those at the El Tovar, 13 restaurants and bars with more than 1,600 seats, 13 gift shops, two grocery stores, an RV campground with 70 sites and transportation including mule rides. Photo/NPS

The contracts for lodging, grocery stores, transportation, food services and mule rides are up for bid at Grand Canyon National Park.

The Park Service estimates the successful bidders' combined gross revenue could be almost $100 million per year or $1.5 billion over the life of the 15-year contracts.

Grand Canyon National Park Superintendent Dave Uberuaga announced Aug. 6 that the prospectuses for the two contracts in the park are available and outline the business opportunities, describe the existing businesses, and provide details on how to submit proposals for the contracts.

If a company other than Xanterra or Delaware North is the successful bidder, the company would pay for upgrades and renovations the two concessionaires made to properties at the Canyon - $137 million on the larger contract and $41 million on the expanded store and hospitality contract.

Uberuaga said there are about eight major concessions companies in the U.S. that could compete for the contracts.

The new 15-year contracts look a bit different than the current contracts.

Uberuaga said the move is designed to create more competition.

"I'm hoping to stimulate competition on the South Rim in pricing as well as visitor services in that there will be somebody else on the South Rim with a large segment of rooms that would compete with the other successful bidder," Uberuaga said.

The new concessionaire for the general stores and hospitality operation will also redesign the Yavapai cafeteria menu, and provide new quick food service at Camper Services.

The lodging and hospitality contract will continue to include lodging, retail and food service in Grand Canyon Village including the El Tovar, Bright Angel Lodge, Thunderbird and Kachina Lodges, Maswik Lodge and Phantom Ranch, as well as retail and food service at Hermits Rest. It will also continue to include transportation services such as bus tours, taxi service and mule rides.

The larger contract will also introduce mobile food trucks to improve food selection and availability at peak visitation times and locations and include valet parking at the El Tovar. The new concessionaire will replace the outdated Maswik South lodge units with more modern and environmentally sustainable lodging. The new concessionaire will also renovate the historic motor lodge cabins near Maswik Lodge to return them to their original use as lodging.

The historic Watchtower, currently operated as a gift shop, will transfer to the Park Service and remain open to the public without a retail area.

All interested parties are encouraged to apply and submit a responsive proposal to the prospectuses. Parties interested in visiting the area to become familiar with the physical conditions and limitations of this business opportunity should contact Laura Shearin, concessions specialist, Grand Canyon National Park at (928) 638-7351 to register for a site visit Aug. 28- 29.

The contracts are advertised on the Federal Business Opportunities website at www.fbo.gov. Copies of the prospectuses are available online at www.concessions.nps.gov/prospectuses.htm.