History comes alive during "Echoes from the Canyon" production 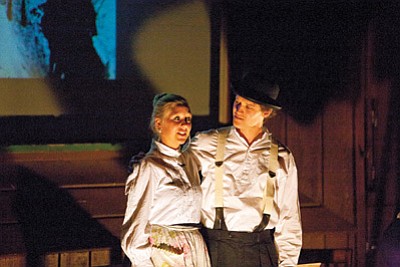 Grand Canyon rangers perform for a full house during a recent production of “Echoes from the Canyon” at McKee Ampitheater at the Grand Canyon. Submitted photo

GRAND CANYON, Ariz. - Grand Canyon residents looking for a night out of fun mixed with some area history are in luck. "Echoes From the Canyon" is coming to McKee Amphitheater for one more performance this summer.

This Saturday, community members and visitors alike can come to the park's final performance of "Echoes From the Canyon" at 8 p.m. at McKee Amphitheater behind Park Headquarters.

Interpretive Park Ranger Erin Whittaker, who played famous architect and designer Mary Colter last year, previously worked at Mt. Rainer National Park, which is where she got the idea to put on a program at Grand Canyon. The framework for "Echoes from the Canyon" came from a similar show at Mt. Rainer called "Shadows from the Past."

Different park rangers play eight prominent Grand Canyon characters during each performance. To find the actors, Whittaker paired the roles with interpretive rangers who either expressed interest about their subject or are doing extensive research into the figures.

"We have a ranger who's been doing work on Eddie McKee," Whittaker said. "He stepped forward and wanted to do that. He did all his own research, he wrote his own script, has his own costume."

Interpretive Ranger Rader Lane, who plays Ellsworth Kolb, created a costume out of his own clothes. He said the "Echoes from the Canyon" performances allow him to bring out his dramatic side.

"I'm typically more emotive than a lot of people, in terms of my programs, so this was just an opportunity for me to get really immersed in a character," Lane said. "It's something that you can kind of slip into in an interpretive program, but not to that extent. So that is kind of nice."

Interpretive Ranger Jill Staurowsky, who has a master's degree in history, is the narrator of the show. Her job is to tie characters' stories together and to interact with the audience.

"I introduce the stories, and then after the performance I help the audience reflect back on them before the next story begins," she said.

The stories are generally the same each performance, but sometimes the actors change according to their work schedule.

"We don't have the ability or money to rehearse every night," Whittaker said. "We have eight characters and the narrator in each show, so we've had several people play each part."

Fortunately, "Echoes From the Canyon" has drawn both local and visitor attention in its second year. With most of McKee Amphitheater's 400 seats filling up during each performance, the promising attendance has led organizers to start thinking about evolving the program into a weekend of living history performances and programs.

"The good news is that I heard there were locals that came out to the show who had never been seen at park event before," Whittaker said. "I think it has drawn people out of the woodwork. I've seen bus drivers come to the program."