A place of acceptance: Camp Civitan campers find opportunity to 'be themselves' 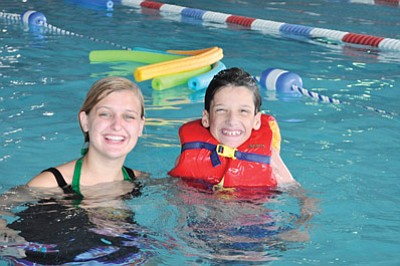 Above and below: campers and counselors enjoy a variety of activities at Camp Civitan including swimming at the Williams Aquatic Center, art projects, gardening and more. Photos/Megan Reddell

Summer camp is usually a time for new experiences, memories and friendships.

Camp Civitan in Williams is no exception. The camp, which serves kids and adults with developmental disabilities, recently wrapped up its eight-week camp season.

Through the activities at camp, campers have the opportunity to experience independence, peer socialization and self-expression, according to Executive Director Dawn Trapp.

Camp Civitan was established in 1968. Civitan clubs, which are volunteer service clubs from around the state, helped build the camp on weekends.

Besides the summer camps, the Civitan Foundation usually puts on one weekend camp each month. The facility is also home to the organization's day treatment and training program, available five days a week year round.

About 350 people attended Camp Civitan this summer, ranging in age from about 8-79 years old. Each of the week-long sessions at Camp Civitan have a theme, from wild west week and Hollywood week to girls and boys only weeks.

"We go into town on field trips, but we also try to just have the best things here just to keep people busy," Trapp said.

A typical day at camp starts with breakfast followed by about two hours of rotations, said Megan Reddell, the camp's volunteer and program coordinator. Groups of campers will alternate between activities such as food and nutrition, gardening, art and sports and games. After lunch, the campers usually have a guest speaker, like Smokey the Bear. After dinner the camp organizes a main activity, such as karaoke, skit night, dances, or scavenger hunts.

"Every group is different, so we have to really work to fit our programs to the client needs," said Reddell, who works in Civitan's Phoenix office for nine months and spends the remaining three months at camp.

About 35-40 people are on staff at the camp, plus about 20 volunteers each week.

The camp experience is just as beneficial for the volunteers as it is for the campers. Some of the volunteers have never been around a special needs population and have some misperceptions about people with disabilities, Reddell said.

"(The volunteers) usually come in kind of a little nervous or they don't know how to necessarily interact, and by the end they realize that (the campers are) just people and they can treat them just like anybody else," she said. "So it's really cool to see that happen."

But the best part of Reddell's job is interacting with the clients and seeing them grow during their time at camp.

"It's one of the few opportunities they have to just be themselves," she said. "They get to come and hang out with their friends, they get to do fun things. It's a place unlike any other place I've ever been."