4FRI forest thinning contract up in the air
Forest Service could transfer contract with Pioneer Forest Service to thin 300,000 acres in next 10 years to new company 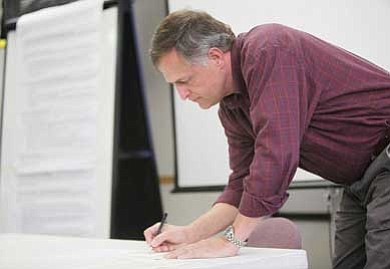 Work proposed under the Four Forest Restoration Initiative (4FRI) could transfer to a different company, pending a legal agreement that the Forest Service is reviewing.

The 4FRI project is the largest forest restoration project in the country, spanning 2.4 million acres within the Kaibab, Coconino, Tonto and Apache-Sitgreaves national forests.

In May 2012, the Forest Service signed the largest stewardship contract in its history. Under the contract, Pioneer Forest Products agreed to thin 300,000 acres in the next 10 years.

Now Pioneer and a third party have submitted a "novation agreement," which the Forest Service is reviewing. The name of the third party, a potential new owner of the company, was not released.

"That novation agreement is basically how the government evaluates whether the sale of this company or a transfer of a contract would be in the best interest of the government," said Henry Provencio, 4FRI team leader.

Members of the Forest Service's Washington office and legal and financial officials will review the agreement before a contracting officer may choose to sign off on it.

"They're looking for whatever kind of technical capacity, personnel, and financial capabilities" the agreement presents, according to Roberta Buskirk, director of acquisition management in the Forest Service's regional office.

The Forest Service would like to finish the review within a 30-day period, Buskirk said.

Currently, Pioneer is meeting the terms and conditions of the contract. The first portion of work within the 4FRI project started in May. The work includes about 1,000 acres of tree thinning on the Apache-Sitgreaves National Forest, according to Cathie Schmidlin, a spokeswoman for the Forest Service's Southwestern Region. The Forest Service expects Pioneer to finish the work ahead of schedule.