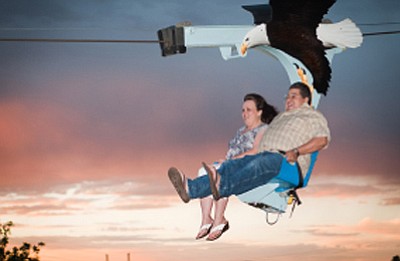 Williams will be home to a new zipline attraction this summer near the Visitors Center, despite concerns about preserving the historic charm of downtown.

Soaring Eagle Zipline and Western Destinations both submitted requests for proposals to the city to operate a zipline. The vendors made presentations to the Williams City Council at the April 25 meeting, and the council accepted the proposal from Soaring Eagle Zipline.

Soaring Eagle Zipline hopes to have the ride open by Memorial Day, which is May 27. The company will install the zipline at the Grand Canyon Boulevard and Railroad Avenue intersection. The high tower will go in the parking lot by the Recreation Center and the low tower will be in the east visitor parking lot. The zipline will cross Grand Canyon Boulevard, with about 30 feet of space between the ride and the street.

Based on the hours of 10 a.m. to 7 p.m. with no operation on Sundays, Soaring Eagle projects Williams will average 900 rides per day for six months. At a price of $12 per ride, the company projects the city will make about $271,000.

Soaring Eagle will construct two Route 66 themed ziplines next to each other. The ride does not require people to climb a tower. Riders will sit in the ride's racecar seats and staff will buckle them in. Then the ride will start going backwards at about 30 mph while traveling upward about 110 feet.

"They get up to the top, then they're going to be able to be seeing everything around them from the freeway to the mountains and Route 66," said Logan Checketts from Soaring Eagle Zipline.

After that the ride will go forward at 30 mph. Throughout the experience, riders will hear the sounds of an engine revving up, squealing tires, downshifting and braking to correspond with the ride. It takes about two minutes.

Soaring Eagle has 22 ziplines around the country. The company will set up the ride on 1-inch steel plate bases, so it will be portable. It may require two 2-by-2 foot footings that would go below ground.

Soaring Eagle will employ between three and five locals at a time to operate the ride, depending on the demand.

The term of the contract goes through December 31, 2013, and the city may renew it for two additional one-year periods.

Mike Brown of Western Destinations proposed a four-line 600-foot zipline to go at the Williams triangle on the east end of town where Route 66 and Railroad Avenue come together.

Western Destinations would have charged $35 per ticket (with half-price re-rides) and pay the city 7 percent of sales.

Resident Rich Millard spoke to the council "in total and complete opposition" of Western Destinations' plan, because of Brown's business practices.

In a staff report to the mayor and council, City Manager Brandon Buchanan recommended accepting the Soaring Eagle proposal for one season. While Buchanan said the location was not ideal, he believed more people would see the ride, which would generate more revenue.

Resident Mike Cowen asked the city to consider the location of the two proposals.

"I've been on the historic district for 20 years and we've worked hard on that downtown area," he said. "We don't want it to look like an amusement park or something."

Wurgler said he did share Cowen's concern about the historic nature of downtown, but called the situation experimental.

"One of the attractive things about this whole situation is it's not cast in stone," he said. "Both of them have that advantage, you put them up, take them down, and they're gone."

Wurgler said the Soaring Eagle proposal seemed to be more advantageous to the city, and moved to accept it. Fritsinger seconded the motion.

McNelly said he worried about drivers getting distracted by the ride as they enter town, the amount of parking the ride would take up, and the proximity of the ride to the Recreation Center.

Payne said he was concerned about the music and sounds associated with the ride.

Dent said the Soaring Eagle zipline would counteract the time and money people have spent to fix up the historic downtown area and offer parking.

"It kills me right now to drive down there and look at the carnival as we come into town. And this is going to give us a carnival look for six months not for three days," he said. "I can't support it. I think it's a great ride but a terrible location."

Moore said the zipline would provide much needed entertainment in Williams.

"We need some more recreation in this town for people to do," he said.