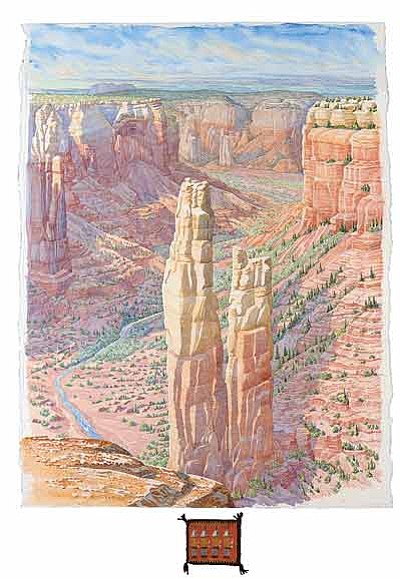 FLASTAFF, Ariz. - For more than 25 years, English artist Tony Foster has explored earth's wilderness regions with his watercolors. He travels slowly and deliberately, often backpacking on foot, creating his paintings onsite and adding finishing touches at his studio in Cornwall, England.

"Tony Foster - Sacred Places, Watercolour Diaries from the American Southwest" is an exhibit focused on the Colorado Plateau and nearby sites.

The exhibit opens at the Museum of Northern Arizona (MNA) in Flagstaff June 16 and tuns through October 13. Early viewing with the artist and exhibit curator will take place at MNA's seventh annual Gala on June 15 The Brunch and Curator's Reception is June 16.

MNA Fine Arts Curator Alan Petersen, who is also the curator of this exhibit, said Foster's paintings are a celebration of the beauty of the natural world, and the personal and visual freedom found in remote locations.

"His paintings are far more than simply depictions of a specific location," he said. "Foster's watercolors combine the painted image with small natural or man-made objects that tell other aspects of the story of his subject. Often his works of art include an entry from his journal and a section of a topographical map, depicting the location and giving the painting a clear geographical context."

Petersen has also selected a number of objects from MNA's collections with their origins near the locations of Foster's paintings. Seeking to create a philosophical dialogue with viewers, these objects enhance the story of the contemporary artist, and those artists and crafts people for whom these places are, or were, sacred.

This body of 33 works of varying sizes (some as large as 3 by 6 feet) painted over a period of three years, explores sites in the American Southwest that have sacred associations for a broad range of cultures and faiths. Foster has painted in locations that were sacred to ancient peoples, and others that are sacred to contemporary Native Americans and a broad range of cultures, faiths, and belief systems. The exhibition also includes a series of eight paintings that document a trip down the San Juan River in southern Utah and depict a riparian environment, significant to all of the natural and social sciences.

"They clearly illustrate the geographical and geological diversity that marks a journey in any direction across the Plateau Province, as John Wesley Powell called it," Breunig said. "Tony Foster's paintings of sacred sites on the Colorado Plateau speak to the richness of the human experience here, the beauty and complexity of the natural world, and the ways in which humanity has given meaning to those places."