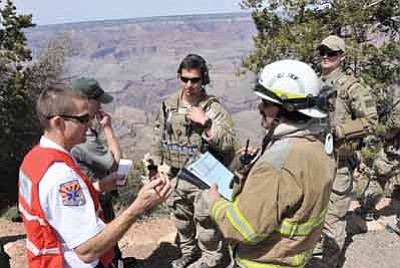 The training was part of a much larger two-week military exercise called Operation Angel Thunder, which combined state, national and multinational emergency response unit efforts, making it the largest mock emergency exercise in the world.

"We've done many mass casualty drills but it's never been that complex," Ken Phillips,National Park Service (NPS) Branch Chief of Search and Rescue, said. "Usually it's with six or 10 patients, this had 55 patients."

For the Grand Canyon exercise, the setting involved a high-speed collision of two vehicles with a park shuttle bus at the Yaki Point Overlook, which struck a group of young visitors taking a photo at the rim. Fifty moulaged US Air Force (USAF) Reserve Officer Training Corps (ROTC) volunteers served as patients.

"We wanted to create a scene that was overwhelming and chaotic," Phillips said. "We succeeded in that. When emergency responders first get there, they have to turn chaos into organization."

The Department of Defense (DOD), along with other emergency services taking part, planned the mock exercise over the course of eight months.

"The event was done at such a large scale because NPS had the support of DOD," Phillips said. "It's always hard to find a large number of patients, believe it or not. In this case, they were able to provide all the patients. On top of that the emergency responders, DOD personnel were able to handle an incident of that size. Otherwise, if it were just EMS personnel, they would have been completely overwhelmed."

"Tusayan Fire Department was part of the fire and EMS response," Phillips said. "It's personnel assisted with vehicle extrication as well as patient triage, treatment and transport."

The need for fire suppression, vehicle stabilization and extrication, as well as technical rescue response to reach and transport six patients below the canyon rim were additional challenges of the exercise.

The USAF and Columbian Air Force provided HC-130 aircraft that transported ROTC volunteers, along with NPS employees from the Southern Arizona and U.S. Air Force Pararescue personnel in an administrative airlift to the Grand Canyon National Park Airport.

A mass casualty incident usually happens around once a year at Grand Canyon, Phillips said.

These scenarios took place over 40,000 square miles of Arizona and New Mexico to imitate U.S. Embassy and federal employee recoveries.