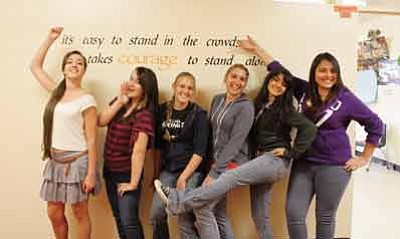 Konkel is the sponsor of the WHS Dance Line Club, which started in January. The club does mostly hip-hop dances, and is open to all students.

So far, the club has learned dances from Eric Aglia of Light Vibe Performing Arts Center in Sedona and Marisa Masson of Williams.

Exchange student Werdinig came up with the idea for the club.

"I missed dancing, and I do it in Austria," she said, adding that she has done ballroom dancing and ballet.

Right now, the club is practicing the dances it has learned so far.

The students hope to perform at school pep assemblies in the future.

"We need to practice a lot more, and we're still all pretty nervous to do it in front of others," Hardison said.

The girls agree the best part of the club is the dancing and the music.

"Dancing with all the girls is really fun," Hardison said.