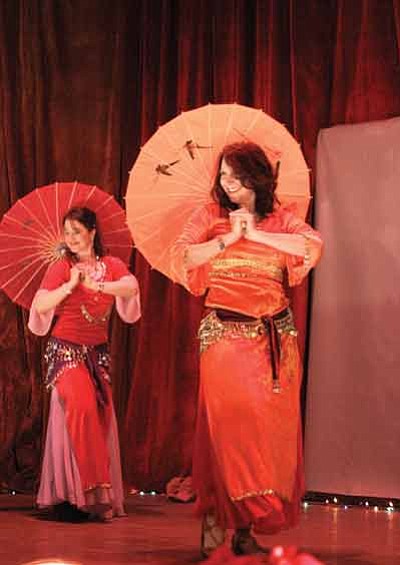 Tribal Fusion dancers entertain a full house at last year’s A Knight To Remember fundraiser at the Sultana Theater in Williams. Clara Beard/WGCN

After a a sell-out "Knight to Remember" fundraiser last year at the Sultana Theater Mark Worden, managing director of the Grand Canyon Renaissance Faire, said "we really wanted to bring a major event to Williams this year. We are very pleased to announce a very special renaissance weekend that will be held in Williams June 29-30."

According to Worden, this will be a different kind of Renaissance Faire. The faire will be held throughout Williams showcasing the town.

"Our community will be packed with summer visitors and people travel from all over the country to come to the faire," Worden said.

The summer marketplace will be at Glassburn Park where traders and merchants will be selling rare and unique treasures, gifts and keepsakes along with food and drink. The area will be open to the public.

Organizers will put on a mixer at Wild West Junction on Friday to welcome volunteers, vendors and performers to town between 5-7 p.m June 29.

In addition, there will be free stage shows throughout Saturday and Sunday at the community stage by the Williams Visitors Center and on a smaller stage at Glassburn Park.

To top it all off, there will be two special dinner shows at the world famous Sultana Theater on Route 66 on Saturday night and a special dinner matinee on Sunday at 2 p.m.

"So we encourage everyone to get their tickets early," he said.

Tickets will be available at the Williams Forest Service Visitors Center. The tickets are good for dinner for two and an evening filled with entertainment, prizes, a silent auction, and a chance to see and hear about Worden's plans to build a more permanent faire with a castle and an interactive renaissance park in the Williams community.