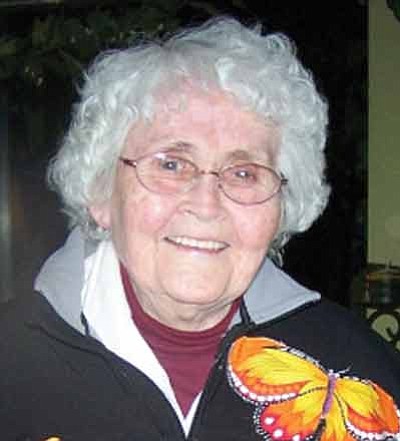 Jeanne L. Maier was born on January 28, 1929 in Lakin, Kan. to parents Lenora and Harold Young. In 1942 the family moved to Bremerton, Wash. where she met and married Louis "Red" Maier, in 1946. The couple raised their three boys in Bremerton. When the kids were old enough, Red's job as a heavy equipment mechanic had them traveling from Alaska to Arizona. In 1966 they moved to Grand Canyon where Red was the master mechanic on the trans-canyon pipeline. She worked at the original Babbitts Trading Company store and later at Valley National Bank.

Lots of traveling required Jeanne to be somewhat of a "Jane of all trades." She enjoyed working with people in such jobs as a bank teller, tour coordinator at the Great Salt Lake, delivery driver for FedEx and most recently as a volunteer at the Black Diamond History Museum. The couple spent several years in Camp Verde, Ariz. near their children and grandchildren before retiring in Clearfield, Utah.

After Red passed away she moved once again. This time to Price, Utah to be close to another child and grandchildren.

The last nine years Jeanne spent in Enumclaw, Wash. where she was close to her brother. Jeanne loved watching her great niece and nephews grow.She was an avid reader and knitter. She had a remarkable memory for family history and was an amazing cook who loved to share her knowledge.

Jeanne was preceded in death by her husband Red Maier; brothers Jack Young from Eugene, Ore. and Bill Young from Fairbanks, Ala.

Jeanne is survived by sons, Mike Maier from Cornville, Ariz, Tom Maier (and wife Elaine) from Grand Canyon, Ariz. and Harold Maier in Mexico. She is also survived by her brother, Charles Young from Hobart, Wash. Jeanne was so proud of her eight grandchildren: Brad, Chuck, Dawn, Matt, Mary, Cora, Gregory and Rachel and her 13 beautiful great-grandchildren.