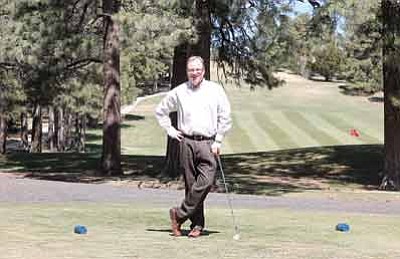 WILLIAMS, Ariz. - Scott Little has been on the job as general manager and head golf professional of Elephant Rocks Golf Course for less than a month, but so far "everything's up to speed," he said.

The golf course opened for the season March 26, the pro shop is stocked, and the restaurant will be open in a couple of weeks.

Little comes to Elephant Rocks from Shalimar Country Club in Tempe, where he spent three years as the general manager and head golf professional. Shalimar is a nine-hole family-owned course.

Little also spent 13 years working for ClubCorp, during which he spent time as the head golf professional at Gainey Ranch Golf Club in Scottsdale, as an accountant, and as a director of golf.

Little said running a city-owned golf course will be no different from other courses where he has worked.

"There's no reason you can't operate a municipality just like any business should be operated, and if you do, the city will be the benefactor of that," he said. "Treat the course like the jewel that it is and things will be good."

Little hopes to increase the number of golfers at the course. Many people call Elephant Rocks one of the best-kept secrets in Arizona.

"I think the city and I will both agree that we don't want it to be the best-kept secret, we want a few more people to come up and spend time in Williams," he said. "So expanding the customer base, bumping up how many people visit Williams and the course is my number one goal."

While Little has been working long days at the golf course, he is looking forward to exploring Williams. Little is no stranger to small town living, since he grew up in the small town of Livingston, Mont.

"It's a cute little town, I'm excited to be here," he said. "To me, it seems like a homecoming, it really does remind me of home."

He added that the small town is a great environment for a family. Little's wife and twin four-year-old daughters will spend the summer with him in Williams. When the course closes in the winter, the family will return to Phoenix.

Little said he is excited to be at Elephant Rocks.

"I hope I can operate it in a way that makes the city proud and brings people out to the golf course with the whole idea that we want this to be a much better asset for the city," he said.