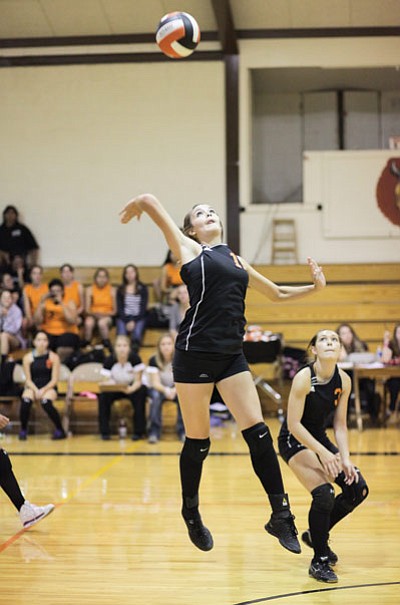 The Lady Vikes going for the kill. Ryan Williams/WGCN

After their first six matches of the season the Lady Vikes held a record of 1-5 overall. With their double header win over Seligman on Sept. 20 they now sit at 4-5 overall and are on the verge of having a non-losing record for the first time since they won their season opening match over Chino Valley.

"Going into the Camp Verde game we switched around our offense, we put Jordan Pettit as the middle blocker and moved Bree Fowler to outside hitter," said Jennifer Carter, WHS Lady Vikes head volleyball coach. "April Zicopoulos and Jordan Pettit really did well hitting and blocking at the net, and that really frustrated Camp Verde. We played really well all around, all the girls stepped up, our serving was good and our play at the net was good. We were right there with them and I felt we definitely could have, and should have, won that match."

The day after the Camp Verde loss, the Lady Vikes traveled to Ash Fork, Ariz. to compete in a two-day double elimination tournament. WHS played six best-of-three matches on the first day of the tournament, Sept. 14, to figure out their seeding in the bracket style tournament of day two, Sept. 15. And despite losing outside hitter Cheyenne Lienhard on one of the final plays in the loss to Camp Verde, the Lady Vikes won five of their six matches on day one.

"We moved Karrina Rotter to outside hitter and she really stepped up to the plate," Carter said. "She had some really good games and had quite a few kills."

The Lady Vikes were seeded number one on day two and made it all the way to the semi-final match before losing to Camp Verde. Due to the double elimination tournament style, WHS was not yet eliminated and still made it to the championship match where they once again would play Camp Verde, unfortunately coming up short for the third straight time against the only team that has had their number the past couple weeks. The Lady Vikes ended their Ash Fork Tournament run with a second place finish overall.

"She played an all around great game, she picked up every ball in the back or any ball that was tipped over the net," said Carter, talking about Lienhard's play. "She just hustled her heart out for that game."

"Devin [McNelly] and Jordan Pettit were standouts against Seligman," Carter said. "Devin is my main setter and every time the ball came to her she put up a perfect set to allow Jordan to get quite a few kills. We ended up playing extremely well and winning pretty easily."

After a much needed and well-deserved week off, the Lady Vikes next regular season match is Oct. 1 at 6 p.m. on the road against Northland Prep in Flagstaff, Ariz., preceded by the junior varsity match at 5 p.m.