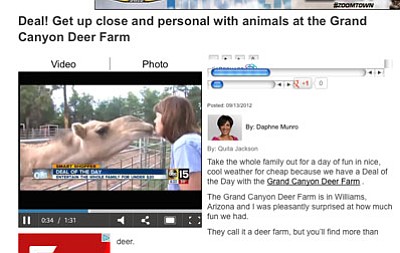 The Deer Farm in Williams is prominently featured is a video segment at www.abc15.com.

WILLIAMS, Ariz. - Phoenix ABC affiliate Channel 15 filmed segments in Williams two weeks ago for their extremely popular Smart Shopper series for five local businesses that are offering fantastic deals and great discounts on their services or products. Each segment aired last week one per day, Monday through Friday.

The businesses featured on the Smart Shopper program were Bearizona Wildlife Park, Grand Living Bed and Breakfast, Pine Country Restaurant, the Grand Canyon Deer Farm, and Wild West Junction. If anyone missed the segments they can still be viewed on www.abc15.com, then click on the Smart Shopper link at the top of the home page.

"Our public relations agency, Front Burner Media, came up with the idea of pitching an opportunity for ABC15 Smart Shopper to come up to Williams. And what we needed to do was come up with five to six deals," said Gioia Goodrum, president and CEO of the Williams-Grand Canyon Chamber of Commerce.

Goodrum added that her office then sent an email out to their membership informing them that this opportunity had presented itself. The chamber received quite a few responses from several local businesses and they then forwarded those responses to ABC15 where the network affiliate would select the five that would make the final cut.

"It's an opportunity for us to get Williams in front of three million people, which is how many viewers they have watching that show," Goodrum said. "If nothing else, you can't buy that kind of advertising, and not just for the businesses either but the entire town of Williams as a whole."

Heather Hermen, owner of Front Burner Media out of Sedona, Ariz., initially came up with the idea after the Williams-Grand Canyon Chamber of Commerce contacted her in the spring and told her they were looking to do something new and different this year and would like some ideas pitched to them.

According to Hermen, she then contacted a producer she has been working with for ABC15 named Quita Jackson. Hermen told Jackson that Williams itself could offer a full week of viewing due to the amount of activities, restaurants, and lodgings located right there in and around town. Viewers could then take advantage of not just one great deal, but multiple ones and make a whole vacation out of it.

"The key is they always have to have at least a 50 percent off deal, so we know that that limits some businesses and whether or not they can participate," said Hermen. "We actually had a pretty good variety of deals that came back, we had more than six that we were able to email down to ABC15. They went in and pitched it to their executive producer and he loved it."

Within a week of ABC15 approving the five businesses in Williams for their Smart Shopper program, the production crew and Smart Shopper team, in conjunction with the chamber, Front Burner Media, and the Williams businesses themselves, were all able to come together, film and produce each segment for each business within two days.

"It happened pretty fast, we put this together and made it happen rather quickly, but those businesses really pulled it together and came up with a great deal," Hermen said.

Both Goodrum and Hermen said they hope to have this be an annual occurrence in Williams, having the Smart Shopper series return each and every year. Hermen added she feels this will draw attention to Williams as well, and even if consumers are not able to take advantage of the great deals being offered they now know what Williams has to offer and possibly what they may have been missing out on.

In order for businesses to participate, besides offering discounts of at least 50 percent, they needed to offer expiration dates on these deals of no less than six months. Hermen filtered through all the submissions and only forwarded to ABC15 the ones meeting these requirements. From these, ABC15 chose the five that would eventually make the cut and be featured on Smart Shopper.

For example, Bearizona was offering 50 percent off general admission tickets per person to whomever emailed the Wildlife Park the promo code, along with their name and how many tickets they would like, they saw while watching Bearizona's segment on Smart Shopper on ABC15. Bearizona would then provide this discounted ticket price to the first 500 who emailed them.

"We are slammed with emails, it's unbelievable. It's awesome, thousands of people are trying to get this deal," said Jocelyn Monteverde, operations manager at Bearizona Wildlife Park. "We're now taking anyone that got us an email that first day though, on Sept. 10. So we're giving the deal to thousands of people, not just the first 500. We're going to honor anyone that emailed us before midnight on Sept. 10. We're really excited, we didn't realize how many people watch the show, it's great advertising for us for sure."