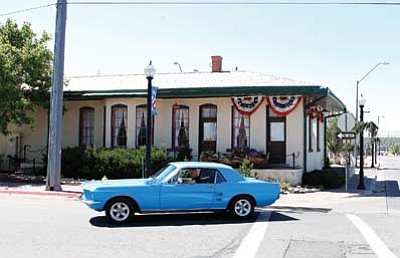 The city of Williams contracts with the Williams-Grand Canyon Chamber of Commerce to provide all of the city's marketing and advertising.

WILLIAMS, Ariz. - The role of a Chamber of Commerce varies from community to community often with an emphasis on business development. In the city of Williams, a major function of the chamber is marketing.

According to Williams-Grand Canyon Chamber of Commerce CEO Gioia Goodrum, her organization wears a few different hats but focuses much of the time on finding ways to bring more visitors to the tourism based community.

"That is the function of this chamber," Goodrum said. "The city contracts with us to market the city of Williams."

"It is half of our budget," Goodrum said.

Williams City Manager Brandon Buchanan said the chamber's role in marketing Williams makes sense as the organization already has a vested interest in the success of their members. One way to help business prosper in the area is to attract as many visitors as possible.

"So, instead of re-inventing the wheel and having two agencies doing that, we empower them to make more of the joint resources than we can probably do individually," Buchanan said.

Goodrum said the Arizona Office of Tourism recently reinstated a partnership marketing program that matches the chamber's advertising spending dollar for dollar up to $25,000.

Goodrum said as a result the chamber is placing advertising in outlets that were previously unaffordable to the organization. Places like the LA Times and Sunset magazine as well as billboards in Phoenix, on I-10, I-17 and the 101.

"It's really given us an opportunity to spread the news about Williams in places we couldn't have done it before," she said. "We think, according to our public relations firm, the $50,000 that we're getting in investment between our money and the money that the state is giving us, is probably going to be close to $200,000 in value. In other words, getting our name out there in places we've never done before."