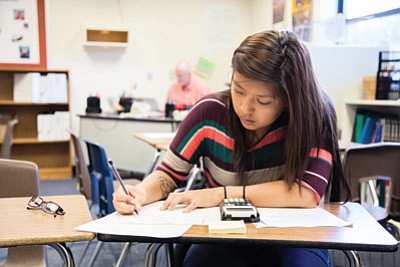 GRAND CANYON, Ariz. - While students pursue a variety of paths after high school, Grand Canyon Unified School District officials, Grand Canyon High School teachers, and Superintendent Sharyl Allen believe all students should be prepared for college and work. This level of preparedness is usually gauged by standardized testing such as the ACT and SAT.

The ACT consists of curriculum-based tests of educational development in English, mathematics, reading, and science designed to measure the skills needed for success in first year college coursework.

Through collaborative research with postsecondary institutions nationwide, ACT has established the following as college readiness benchmark scores for designated college courses: 18 on English composition test, 22 on mathematics test, 21 on reading test, and 24 on science test. Grand Canyon High School members of the class of 2012, who took the ACT test, surpassed Arizona averages in every category.

Allen commented on the percentage of ACT-tested students ready for college level coursework.

"One hundred percent of our students passed the English composition, 75 percent for college algebra, 75 percent in science, 50 percent in biology, and 50 percent meeting all four," she said. "State averages were 54 percent in English, so we doubled the state [average] in English and almost the same for college algebra because the state average for that was 39 percent. Social sciences were 42 percent, biology was 23 percent, and we more than doubled the state average for overall score because meeting all four was 20 percent."

Grand Canyon High School class of 2012 ACT averages versus the state of Arizona averages are as follows:

"It shows that last year's classes ACT test anchors did quite well. I think it's the best class that we have had at least in the last five years," said Allen. "The AP classes are geared towards the advanced placement test, different than the ACT. The ACT is that general test that indicates whether you're ready for college level work. And this is where if students don't score certain levels for colleges they put them in remedial classes that are no credit based and that they pay for."

The Grand Canyon High School has begun to see this upward trend in college readiness, Allen feels, as more college preparatory courses are added to the school curriculum. This year the high school is offering four advanced placement (AP) classes for students; AP calculus, AP literature, AP psychology and AP studio art. In addition, the middle school Spanish classes have been restructured to a pre-AP format, preparing students to excel in the language requirements of most colleges today.

"So the students that score at or above these required levels, at least in the state of Arizona's universities, are going to go to regular institutions. If you were trying to get into Stanford, Berkeley, California Institute of Technology, or a similar institution, they'd want you to take the SAT, the scholastic aptitude test," Allen said.

The superintendent is extremely pleased with the improvement the high school has shown in just the last five years alone, and hopes more and more students continue to not only take the ACT test, but excel at it as well.

"Our school district is making the shift, currently the ACT is a voluntary test. Community colleges and some Arizona universities will accept you without taking the ACT, based on GPA, your writing score, and application," said Allen. "Outside of the state it's a different game. What we think is really critical are these words, college readiness. Because with the new federal standards that our state has adopted of the common core requiring career and college readiness, the ACT gives kids a really good predictor to see if they're college ready."

Grand Canyon High School is looking to have every junior take the ACT test this year. The cost of the exam, which is normally paid by the parents, will be subsidized by the school district this year.

"We want to ensure that the students are getting those college ready courses before they go take the test," Allen said. "So when we look at the class of 2012, I certainly think that we could make the case that increasing our advanced placement courses here is having a positive impact as well."