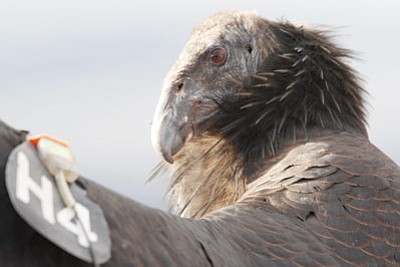 PHOENIX - A review of the 2007-2011 period of the California condor reintroduction program in northern Arizona and southern Utah is complete.

A team of wildlife officials, land managers and condor biologists point to a number of successes, including an increase in the free-ranging population, consistent use of seasonal ranges by condors and an increased number of breeding pairs. However, exposure to lead contamination from lead ammunition continues to limit the success of the program. The team made several recommendations to address the lead issue.

The experimental southwest condor reintroduction project began with the release of six condors at the Vermilion Cliffs in Arizona in 1996. This is the third five-year review of the program.

At the end of 2011, there were 73 free-ranging condors in the Southwest population - an increase of 16 birds during the review period (there are presently 76). A total of 41 captive-raised birds were released into the population. Ten chicks were wild-hatched during the 5-year period, and seven of them died or went missing. An additional 24 adults died or went missing, and five birds were returned to captivity.

During the first 10 years of the recovery program, most birds stayed in the general vicinity of the Vermillion Cliffs release site or concentrated along the Colorado River corridor. During this review period, many birds in the population have been spending a greater portion of the year in Utah, using areas near Zion National Park along the Kolob Terrace and the high country of southern Utah.

As the wild population has matured, there has been increased breeding activity, with five to six pairs attempting to breed each year from 2007-2011 and one to three chicks successfully produced each year - all in Arizona.

Lead poisoning remains the primary diagnosed cause of mortality in the population. Lead poisoning cases occur predominantly in the fall and winter months and are associated with the big game hunting seasons, but sporadic incidents have occurred in the spring and summer indicating that varmint hunting or dispatched domestic animals may also have an effect on the species. The Peregrine Fund's field team attempts to trap every individual in the free-flying population before and after the hunting season, but as the population has grown and is using a larger range, this has become more difficult. Between 85 to 97 percent of the population was tested for lead exposure each year of this reporting period, with 27 to 56 percent of those tested treated (chelated) for lead poisoning.

Since 2005, the Arizona Game and Fish Department (AGFD) has conducted a voluntary lead reduction program, with 83 to 90 percent of successful Kaibab-area hunters participating in 2007-2011. The Utah Division of Wildlife Resources (UDWR) initiated a voluntary non-lead ammunition program as the population expanded its range for the Zion Wildlife Management Unit in southern Utah in 2010, but estimates only five percent participation among these hunters. The number of Utah hunters who are involved in the program is expected to increase, however, as the UDWR expands its non-lead ammunition program in 2012.

In the spirit and intent of the Endangered Species Act 10(j) non-essential, experimental population rule establishing the Southwest condor population, the review team believes that addressing lead-caused mortality would enhance the success of the program, and such efforts should be voluntary and recommends actively pursuing additional funding sources, including funding from sportsman's groups, ammunition manufacturers and retailers, and conservation groups.

The team does not recommend removing and relocating the condors in the Southwest population to California or Mexico as those areas do not afford any greater realized protection than the release area in the Southwest. The Peregrine Fund will conduct a habitat assessment that considers the use of lead ammunition and resulting exposure to scavengers. In addition to more closely assessing the amount of lead that condors are exposed to in their current area, this effort will assess the amount of lead that exists in other areas. The model also may be useful in determining whether there are additional locations for condor releases.

Ultimately, the partner agencies will seriously consider withdrawing support for condor reintroduction efforts in the southwest if, by the end of 2016, a reduction of extreme lead exposures (blood lead levels) is not achieved and a declining trend in diagnosed lead related mortality and morbidity is not observed.

The review was conducted as a joint effort between the Service, Arizona Game and Fish Department, Utah Division of Wildlife Resources, The Peregrine Fund, Grand Canyon National Park and Bureau of Land Management, with input from numerous agencies, local governments and commenters.

The goal of the California Condor Recovery Plan is to establish two geographically separate, self-sustaining populations - a primary population in California and the other outside of California, each with 150 birds and at least 15 breeding pairs.

The recovery effort is a cooperative program by federal, state, and private partners, including The Peregrine Fund, Arizona Game and Fish Department, U.S. Fish and Wildlife Service, Arizona Strip Field Office of the Bureau of Land Management, Grand Canyon and Zion national parks, Utah Division of Wildlife Resources, and Kaibab and Dixie national forests. The Peregrine Fund, a non-profit organization, is funding and conducting the releases and monitoring the condors. For information about the California condor program in Arizona, visit www.peregrinefund.org or