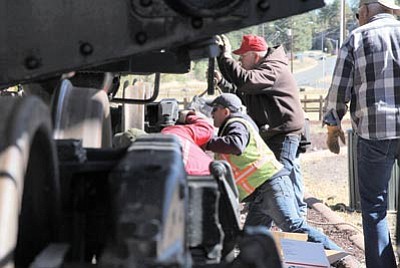 City of Williams maintenance crew members along with Grand Canyon Railway employees and others guide a vintage tank car onto a length of railroad track in Glassburn Park. Ryan Williams/WGCN

WILLIAMS, Ariz. - A 1918 army tank railcar hung suspended in the air above Glassburn Park last week before it was placed gently on a length of railroad track where it will rest permanently.

The tank car and a boxcar are part of a new railroad exhibit in the park. The city of Williams and Arizona State Railroad Museum (ASRM), established in 1998, have once again combined efforts to complete a community enhancement project. The interpretive exhibit will introduce visitors to Williams' railroad legacy.

Al Richmond, chairman and CEO of ASRM, said the boxcar and tank car are part of the museum's collection. While the museum has yet to find a permanent home in Williams, it does have close to $2.7 million in rolling stock stored around Arizona.

"We just haven't spent the money to bring them in yet," he said.

The two cars now at Glassburn Park had been stored at Camp Navajo. BNSF moved the boxcar to Williams but the 1918 vintage army tank car had to be moved by truck on I40 because it is equipped with friction bearings and unable to move on the railroad.

The exhibit is also part of the Arizona Centennial Legacy Project.

"These were projects that have to do with celebrating Arizona's centennial," Richmond said. "Putting this equipment in the park is one reason we were selected."

In the coming weeks the cars will be painted by Grand Canyon Railway crews with lettering and railroad logos provided by Ponderosa Sign and Design. City of Williams crews will renovate the park adding trees, stone and a picnic ramada.

Money for the year-long project comes from the museum's Transportation Enhancement grant administered by the Arizona Department of Transportation.