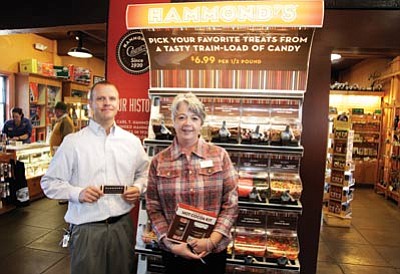 WILLIAMS, Ariz. - Hammond's Candies is now available to consumers and candy-lovers of all ages right here in Williams at the Grand Canyon Railway Depot.

"With all the flavors of candy bars we have, we also sell them in packages so consumers can get a reduced rate if they buy 10 or more bars," said Maryellen Fleming-Hoffman, director of retail for the Grand Canyon Railway.

"There's a great history to Hammond's candy, and their marketing kind of resembles ours, which makes this partnership between Hammond's and us at the Railway so perfect," said Jeff D'Arpa, general manager of resort operations for the Grand Canyon Railway. "It's been some of our highest volume sales already, so now we're getting really excited about Polar Express with all the candy canes and holiday treats that will be available."

The idea to place a Hammond's candy store within the Grand Canyon Railway Depot was initially brought to Railway management's attention by the company's buying team out of Denver.

"The Railway was chosen as an initial pilot," Fleming-Hoffman said. "We're pretty pleased with the results and feedback we've been getting so far."

Carl T. Hammond Sr. founded Hammond's Candies in 1920 in Denver, where he did it all, including developing the recipes, making the batches, selling the candy, and performing all administration tasks.

During the 1930s Hammond crafted his first original soft confection, Mitchell Sweets. The fluffy marshmallow treat wrapped with a rich, buttery caramel quickly became a signature candy in the Hammond's line, and has remained a favorite since.

"All these goodies cater to our day-trippers to the canyon, with popcorn, snacks, and that kind of thing, and it also caters to their sweet tooth as well," said Fleming-Hoffman. "All the candy is done in small batches, it's not hugely mass produced. All the candy canes are cut and turned by hand, the candy bars are all done in separate pump batches, and it's all handmade right in Denver, Colorado."

Hammond's product line continues to expand. They are the world's only flat taffy manufacturer and have delved into the gourmet food arena with new lines of sweet and savory dips, snack bags, dipping pretzels, and caramel corns, all while keeping the quality of a small-batch, handmade environment (they only make candy 70 pounds at a time).