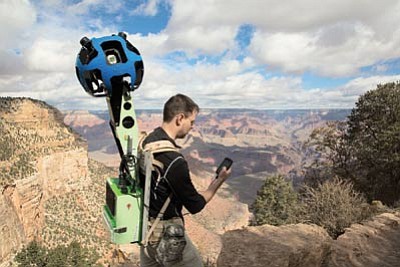 Luke Vincent, engineering director with Google Maps, treks down into the Grand Canyon with a camera tracker strapped to his back. Submitted photo<br /><br /><!-- 1upcrlf2 -->

GRAND CANYON, Ariz. - On Oct. 22, Google teams decended Grand Canyon trails and ventured down the Bright Angel Trail to Phantom Ranch, hiking out the next day on the South Kaibab Trail. During their walk, they captured Canyon images that people around the world will soon be able to view from home.

"Luke Vincent, one of our engineering directors with Google Street View, was adamant about wanting to trek out the next day rather than just put the gear on mules and hike out. He's really excited about capturing as much comprehensive imagery as he can and using this new tool to be able to do that," Google Spokesperson Deanna Yick said.

The Canyon is the first to receive street views with Google's state-of-the-art tracker camera system, which allows crews to document images only available to hikers.

"It's building out a base map in terms of actual image of the map, the satellite and the aerial imagery, the roads, the directions all of that," Yick said

Yick went on to say Street View is all about providing an additional view of the world or in other words, giving people a street level, immersive panoramic.

However, in the case of the Grand Canyon, Google went the extra mile to provide people with the most comprehensive imagery available to date. The intent is to show users where to go or help them get there through cyberspace if they may never physically visit the Canyon. How do they do this?

Yick said a "magnetometer" allows Google to determine the direction and the orientation that the tracker is facing so engineers can know exactly where the device is facing for precise replication on the map. A tool called an "accelerometer" also helps Google determine orientation, geo-locating the images captured and matching them to the location on Google Maps, ensuring their accuracy.

Previously, Google has tracked street views with cars as well as the "Street View Trike," a three wheeled bike inspired by the rickshaw. The trike lets Google go to places like university campuses, theme parks, and zoos to capture images not accessible with a vehicle.

The trike allows Google to gather 360° horizontal and 290° vertical panoramic street level views. With these separate images, a 360° panorama is created.

In 2007, Google initially launched their map project in five US cities. Since then, the multinational corporation has said their mission is to map and photograph the entire world. The goal of Google Maps is to provide users with the most comprehensive, accurate and easy to use maps in the world, Yick said.