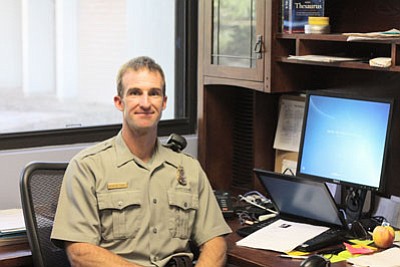 GRAND CANYON, Ariz. - The Grand Canyon may be an imposing vista, but juggling the emergency needs of the millions of visitors who come to see it every year is just as remarkable.

Branch Chief Emergency Services Brandon Torres is about six weeks into his new position. He oversees the emergency services program for the Grand Canyon, which includes the EMS, structural fire, Search and Rescue (SAR) and the preventative SAR programs for the park.

"The preventative search and rescue is an incredible, cool program which tries to prevent search and rescues," Torres said, who worked at the Canyon previously from 2006 to 2010. "It involves tons of volunteers, some paid, fulltime and seasonal staff."

The park EMS program, one of the busiest in the NPS, handles over 1200 incidents annually and much of what happens within the emergency services department is weather dependent. Heat related illnesses, trauma, preexisting medical conditions and orthopedic injuries surface regularly from visitors hiking down into the Canyon. For that reason, airlifting people out of the canyon is a routine inevitability.

"Somebody with an unstable ankle injury you can't really put on a mule," Torres said.

It's hard for the Branch Chief to estimate how many people work within the emergency services branch of the park. The number of volunteers, seasonal employees and even college interns varies according to the time of year.

Training is another major factor that comes out of the emergency services arena and rangers have to be qualified to wear many different hats. However, because the call volume is greater at the Grand Canyon, emergency services have management staff who are responsible for ordering supplies, hiring and training, among other things.

"While we don't technically support a geographic area, we do really try and staff an ambulance ever day," he added. "We also try to have a crew available to respond to a fire every day, so we are trying to fill those roles supplemented by the patrol staff that's on duty. So every day we have a morning briefing that makes sure everyone knows what roles everyone's filling that day."

And the roles are consistently swapped around to keep skills fresh. In the summer, Torres and his coordinators take a step back to allow other members of staff to the experience of a more emergency responses, whereas in the winter, when seasonal employees and volunteers are gone, they will step up to "the front lines."

"This morning, there was a fire alarm that went off, so we had to have an engine response and there was a woman that needed ambulance care at the same time," Torres said, describing a typical day at the office. "We had a family from Japan that came in here because we have a missing individual from Japan who has been missing for 11 days. We had a medi vac request for a helicopter out of Roaring Springs and a request to take our helicopter over to Zion National Park for a rescue operation over there."

Maintaining the diversified training needed to be an emergency responder inside a unique environment like the Grand Canyon is what Torres cites as one of the biggest challenges.

"Helping people, applying skills, working in the wilderness and living in remote places is part of the fun," Torres said. "Like any other emergency services program, we get to see people in some of the worst days their having in their lives and being able to help them out of that can be rewarding."