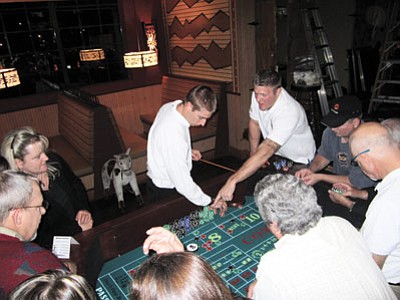 "Last year they gave away a ton of prizes," Grand Canyon Brewery Owner John Peasley said about the casino night. "You come in, you buy your ticket, you get a couple chips, you gamble and if you make money on your chips you can buy raffle tickets and then you put in the raffle tickets for the prizes."

Even though the Mexican themed menu is still a work on progress, Grand Canyon School graduate Bettencourt said one of the appetizer dishes will be chorizo and potato taquitos with green chili tomatillo paired Grand Canyon Brewery's Vienna Style beer.

"Then we are also doing an entrée with the two other chefs," the head chef added, who designed the menu after tasting the beer selection. "Carne Asada with rice and pumpkin chipotle sauce. I think we are pairing this with the Pumpkin Porter."

Peasley said last year's food pairing was impressively top-notch, which in part made for a sold out event and a request to make this year's event bigger and better than ever. For that reason, Grand Canyon Brewery will feature two new seasonal beer concoctions, along with an unveiling of "a new beer product."

But it's not just the dishes and beer that will make for a memorable evening. The raffle prizes are also a big draw.

This year, Grand Canyon Chamber of Commerce General Manager and event organizer Josie Bustillos is featuring an "Experience Arizona" trip for one lucky winner, which will be a couple days in Page, a couple in Scottsdale, Grand Canyon and more.

"Josie is really the one that set this whole thing up, hats off to her, Peasley said. "She's the one that organizes everything."

The chamber fundraiser is open to the public. Reservations are required for the food and beer pairing. Advance tickets are $50 per person. Day of event tickets are $55. Happy hour starts at 5 p.m. Dinner is served at 6 p.m.

Those not taking part in the pairing won't miss out on tasting Grand Canyon Brewery's beer. Beers that are chosen for the pairing will be poured throughout the casino night as well.

For more information and to make a reservation, contact Bustillos at (928) 638-2901 or purchase tickets online at www.grandcanyonbrewery.com.