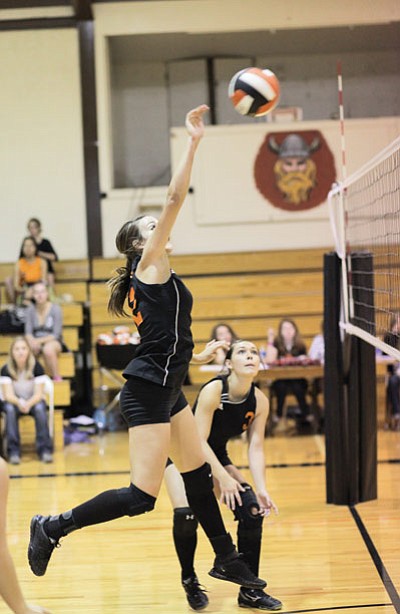 Jordan Pettit gets above the net to score in a recent Lady Vikes game. Ryan Williams/WGCN

FLAGSTAFF, Ariz. - The Williams Lady Vikes volleyball team fell to the Northland Prep Academy (NPA) Spartans (Flagstaff, Ariz.) on the road on Oct. 1 in three sets (25-12, 25-23, 25-23). The final score is not indicative of just how closely this match was played.

The Lady Vikes were riding a three-game regular season winning streak going into this road matchup against NPA and pushed the Spartans to the limits in the second and third sets.

After a somewhat decisive set one win by NPA, Williams made all the necessary adjustments to not only compete but also come close enough to try and steal the victory.

"Northland Prep is such a power team, and that first game we were just getting used to their hitters and maybe we were a little surprised at how Northland played," said Jennifer Carter, Williams High School head volleyball coach. "So I think that's why our first game went that way, we were just trying to get into that rhythm. Our blockers weren't there because their hitters could hit so hard crosscourt. So it took some adjustment on our blockers and some adjustment on our coverage for the following sets."

The third set, which turned out to be the deciding one, was the closest game of the evening. Neither team held more than a three-point lead the entire set as they went back and forth scoring on each other. But the valiant comeback came up just a little too short and maybe started just a little too late. NPA finished off Williams 25-23 in the third and final set.

"Our loss came down to the fact that we never played any offense," Carter said. "Once we were able to actually get the ball in the air, the setter had to run all over the court trying to get that good set. So sometimes the sets were off and even when we did have good sets then our hits were off."

Not a bad showing for a team that almost exclusively played defense and could never get their offense going. Players, coaches, and fans are left wondering how different the outcome could have been had they been able to play some strong, consistent offense to go along with their defense.

Cheyenne Lienhard contributed with some key blocks and libero Jessie Durnez played well in the back row, according to Carter. But the team needed even more from them and more offense overall.

"We could have won, those girls played a darn good game," said the head coach. "We've had some really close games this year that have ended on our errors. We need to develop that focus to overcome these mental obstacles and develop that killer instinct to put these teams away, which we are lacking right now."

This was a winnable match for Williams; their performance in the second and third sets proves that. Unfortunately, mental mistakes and untimely miscues cost them dearly. The Spartans won set one, but the Lady Vikes beat themselves in sets two and three.

The Williams-Grand Canyon News went to print before the Lady Vikes home game against Ash Fork Tuesday night. Williams' next match is Thursday at home against Chino Valley at 6 p.m., preceded by the junior varsity match at 5 p.m.