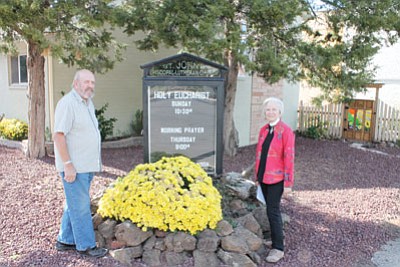 WILLIAMS, Ariz. - St. John's Episcopal-Lutheran Church celebrates 100 years of serving the community of Williams this Sunday beginning with church service at 10:30 a.m. The service will feature a visit from Bishop Kirk Smith, a baptism, and new members being brought into the Church. A luncheon will immediately follow, as well as a music concert for the entire community and a reception at 2 p.m. Everyone in the community is invited.

The Reverend Ann Johnson said they would also have special guests joining them from the Holbrook and Winslow areas to help in their all day celebration and Sunday morning service at the century old Church located at 202 West Grant Avenue.

"They're going to come over and start the service with a Native American opening ceremony," said Johnson. "We're excited that they'll be participants in the service."

St. John's was first established as an Episcopal Church in 1912. They originally met in the Methodist Church, the Opera House, and the Fray Marcos Hotel (which was a Harvey Hotel and is now the Grand Canyon Railway Station). The first formal structure was built near the intersection of Seventh Street and Grant Avenue. The congregation outgrew this original structure, as well as its second building, and by 1952 a new church was erected.

This 1952 structure is the current site of St. John's Episcopal-Lutheran Church. During construction of St. John's, Christ's Episcopal Church in Jerome, Ariz. was being disassembled. The Jerome congregation donated the stained glass windows, altar, pews, baptismal font and hardwood flooring to the Williams congregation. Individual members of St. John's transported the furnishings.

In 1980, St. John's Episcopal Church joined with the local Lutheran congregation to become one church family.

"The congregation was an Episcopal congregation until the 1980s when the Lutheran Church joined it," Johnson said. "And since then it's been a combined congregation."

The Episcopal Church was close to being disassembled itself in 1980, so they joined with the Lutheran Church out of necessity at first, just to remain open. The mutually beneficial relationship has been going strong now for over 30 years.

The new dual fellowship received national attention for this innovative union. Church members chose "Two in heritage, One in Christ" as their motto.

"We were one of the first, if not the first, in the United States to combine Lutheran and Episcopal Churches," said Dayl Bingell, ordained deacon and retired priest.

According to Bingell, they were also one of the first Church's to employ a woman pastor.

In 1975, a fire raged through Walker Hall (the parish hall added to the building in 1962) gutting the structure and causing heavy smoke damage to the rest of the church. Members worked diligently the following weeks to clean and paint the church, as well as work with contractors to make the remodeled hall even more useful.

In 1989, St. John's began the process of becoming a "Total Ministry" church. In this type of ministry, all members share in the business and work of the church. This creative concept placed St. John's in the spotlight once again. During this time members were not paid for their services, they voluntarily contributed their time and talents to the good of the blossoming congregation.

The church family called two local members to become priest and deacon; Bingell was one of those members. After 15 years as deacon and priest, Bingell retired in 2006. Bishop Smith appointed Johnson St. John's new vicar in 2006. She was ordained deacon in 2006 and priest in 2007.

So come celebrate the rich history and diverse heritage of this long-time Williams congregation on Sunday, and hope for another 100 years.