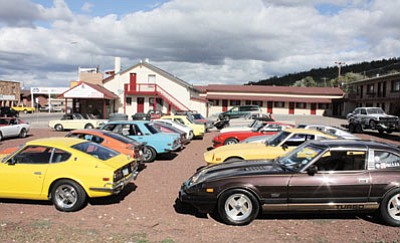 WILLIAMS, Ariz. - This weekend more than 60 distinctive models of Japanese engineering will invade Williams, primed to show off a uniqueness all their own, during the second annual Multi-State Grand Datsun Classic car show.

"We love this town," Southern California Datsun Roadster's Club (SOCALROC) president Chris Breyer said. "Williams is perfectly located to draw people from so many states. It's funny, all of the owners from last year talk about Williams now like it has always been a Datsun thing. They don't refer to it as the Multi-State Datsun Classic, they say, 'I can't wait for Williams next year.'"

On Friday, Williams will greet Datsuns from six states - Arizona, California, New Mexico, Nevada, Utah, Colorado and even Mexico - with a meet and greet at Wild West Junction from 6-9 p.m. check out the Roadsters, Z Cars, pick ups, 510s and "rough Datsuns with potential" and chat with their proud owners from 10 a.m. to 3 p.m. the next day while they are parked at Dairy Queen, located on Route 66. Last year's Best of Show will be on display and Williams Police Dept will be on hand with DUI and child car seat safety education. The club sas chosen Mayor John Moore as their guest of honor and will be selecting this year's Best of Show, also called the Mayor's Choice Award.

The SoCalROC car club's membership extends across the nation, and includes several members in Japan. Breyer said local Williams residents Ron and Ginger Dickson are active members of the club and often travel to southern California to take part in activities. The decision to host an event in Williams was their suggestion.

"Ron made a comment a couple of years ago about coming to Williams for a club barbecue," he said. "So we began planning a meet in Williams and by the time the date came it had turned into a Classic car show/meet from the overwhelming response."

The Multi-State Datsun Classic is organized by CM Breyer & Associates and NostalgicDatsun.com and operated by SoCalROC. The group has partnered with Camp Reach for the Sky, an outreach of the American Cancer Society for Children with Cancer. Camp Reach for the Sky is set up so the children diagnosed with cancer can attend camp for free.

"We are always greeted with such warmth that we feel like we belong," Breyer said about Williams. "We appreciate our relationship with Williams and look forward to it lasting a long time. We also want to thank our host, Debbie and her crew at The Dairy Queen for hosting us a second time around. The Williams Dairy Queen, now there's a family."