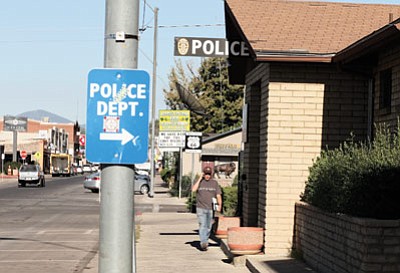 WILLIAMS, Ariz. - The "show me your papers" provision of Arizona's SB 1070 is now in effect. On Sept. 18 a judge in Arizona ruled that police can immediately start enforcing one of the most controversial sections of the state's immigration law, marking the first time officers can carry out the so-called "papers please" provision.

How this law will affect county sheriff offices and local police departments from a city to city or county to county basis will vary based on the size, scope, and location of that particular jurisdiction area.

"It won't really change anything that we already do now," said Williams, Ariz. Police Chief Herman Nixon. "When we have a suspect that we have probable cause to arrest or we have reasonable suspicion to stop, we're required to check their immigration status anyways."

Nixon said his department will not stop people based on race or national origin.

"We don't do that now and we're not going to do that," he said. "In this community it's not going to change what we do, we're going to operate the same way we always have and this bill is really not going to affect us."

The decision by U.S. District Judge Susan Bolton is the latest milestone in a two-year legal battle over the requirement. The formal order Bolton signed dissolves the injunction she issued more than two years ago blocking the state from enforcing key provisions of the 2010 law.

Opponents and certain civil rights groups responded to the Supreme Court decision by asking Bolton to block the requirement on different grounds, arguing that it would lead to systemic racial profiling and unreasonably long detentions of Latinos if it's enforced.

Bolton's long-expected move came after the U.S. Supreme Court ruled in June that she was legally incorrect in enjoining the section that requires police, while enforcing other laws, to question the immigration status of those (whom they have already stopped with just cause) suspected of being in the country illegally. The justices said there was no evidence that the Arizona law, on its face, conflicted with federal law.

The judge's order however is not likely to be the last word on the contentious law. A coalition of civil rights groups is awaiting a ruling from the 9th Circuit Court of Appeals on their latest effort to prevent the questioning requirement from taking effect.

Some backers of the law question the level of cooperation they will get from federal immigration agents, who will be called to verify people's immigration status and be responsible for picking up illegal immigrants from local officers.

"The problem with that is ICE [U.S. Immigration and Customs Enforcement] isn't going to come out for an individual we stopped for running a stop sign, and we're not going to spend an hour of our time out there trying to figure out somebody's legal status," Nixon said. "We're just not going to do that. If they commit a crime and we put them in jail, their status is going to get checked, but we would check that anyways."

Federal immigration officers have said they will help, but only if doing so fits with their priorities, including catching repeat violators and identifying and removing those who threaten public safety and national security. If federal agents decline to pick up illegal immigrants, local officers in some cases will likely have to let them go unless they're suspected of committing a crime that would require them to be brought to jail.

"A lot of what we do on arrests is already being done anyways because when they're from another country we have to check on them and their status, and we have to give them the opportunity to call their consulate," said Nixon. "Our officers have all been trained on that, everything's right there in the book, and we have protocols to follow."

Governor Jan Brewer, who signed the measure into law, has continued to point out that SB 1070 allows an inquiry about immigration status only after someone has been stopped for some other reason. And the governor said she has "full faith and confidence" that state and local police can enforce the law fairly and impartially.

Nixon said his biggest concern with SB 1070 is the possibility some victims illegally in the U.S. might not come forward when necessary.

"I want to make sure that they're heard. If you're a victim or you need to contact the police for whatever reason, we are not going to be checking your immigration status," Nixon said. "My concern with this is that we have a victim of crime, a witness to a crime or someone who sees something suspicious and they don't come forward. We want them to come forward; we don't want them to be scared that we're going to be checking their immigration status, because we're just not going to do that."

SB 1070 does have a provision that requires it to be enforced consistent with existing anti-discrimination laws. But it does allow someone's race to be used as a factor, though not the only one, in determining whom to question. In reviewing the law, the Supreme Court pointed out that current Arizona law already permits individual officers, using their own judgment, to question those they have stopped about their immigration status.

Ban on sanctuary cities introduced in Arizona legislature
Williams PD offers new tip line
One 'Hell' of a weekend
Why should we care about the 2020 census?
Williams Police to wear body cams starting in August
Event Calendar