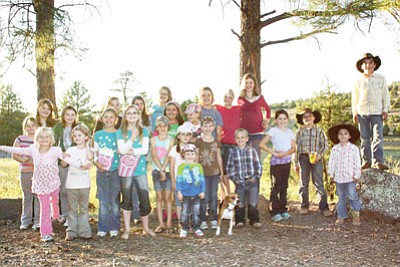 FLAGSTAFF, Ariz. - Members of the Cataract 4-H Club brought home many ribbons and awards from the Coconino County Fair last month. They entered many projects ranging from market beef to horticulture, rabbit, to horsemanship and many areas in between. It was a successful fair for all and already the members are making plans for next year.

The horse show takes place the weekend before the Coconino County Fair. Six members of the Cataract 4-H participated at the weekend show and they all did very well. Tori and Brooklynn Maebe tied for sixth place in the Junior Trail Class during the western show on Aug. 26. Chisolm Wells won the Junior Reining Class and place fourth in western riding.

The 4-H gymkhana was Aug. 25 and it poured rain for the entire first half of the competition. The girls who entered were such good sports and every one of them ran the poles in the pouring rain. The rain slowed down for the barrel racing, but the arena was very wet. Chisolm Wells placed second in the barrel racing and fourth in the pole bending. Bailee Cameron placed first in the barrels, third in the poles and won the junior high point all around buckle for the event. Tori Maebe placed fifth in both the barrel racing and pole bending. All of them did so well. Chisolm Wells and Bailee Cameron will be attending the State 4-H Horse Show this month.

All four of these young ladies also went to the Round Robin Showmanship. First year member Katherine Westlake won both Novice Market Lamb and Goat Showmanship while Chisolm Wells was the Reserve Championship Novice Goat Showman. Reilly Drye was the Reserve Champion Junior Beef Showman in a very difficult showmanship. In the small stock, Tori Maebe was the Grand Champion Novice Rabbit Showman. Bailee Cameron and Chisolm Wells also won the herdsman awards for the beef and sheep barns, respectively.

The annual Northern Arizona Junior Livestock Auction went very well and all of the livestock members sold their market projects for a great price. The members appreciate the support businesses and individuals give to 4-H by coming to this auction and supporting the members. If you have never been to the auction at the fair, you are missing out. Please come next year and join the fun. It is also great advertisement to either add on to one of the member projects or purchase their animal. You will be supporting local agriculture, quality youth, and the future of agriculture.

Cataract members also entered a large number of projects in the club work building. This building showcases what our county's members have been up to all years and gives them a place to exhibit projects in area other than livestock. This year, Cataract 4-H members once again won the Club Work Award for the most entries. They also brought home numerous best of show awards. Christabelle Jones won a best of show for her pumpkin bread, Reilly Drye won best of show for her 4-H rag quilt and Chisolm Wells won best of show for her nine-patch pillow and photography entries. Everyone else won numerous blue and red ribbons on entries in sewing, photography, foods, record books, demonstrations and more.

The Cataract 4-H Club will hold their next meeting at 5 p.m. Nov. 7 at the Williams Rodeo Barn for a meet and greet information session. Please come and meet the leaders, ask questions and possibly enroll for the 2013 4-H year. Once again, there will be leaders in sewing, rabbit, market beef, lamb, goat, breeding projects, photography, clover buds, horse, pottery and more. Please contact Shasta Wells for more information at (928) 607-4222.

Cataract 4-H members will be selling Gold Canyon Candles this month to raise funds for the club. If you do not know a member but would like to purchase a candle or two, please contact Victoria Westlake at (928) 635-2906.