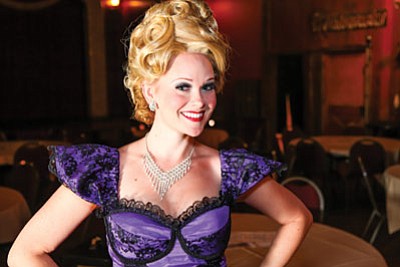 TUSAYAN, Ariz. - When she's not belting out "the high C's" as the sassy Madam de Murska in "Miss Kitty's Grand Adventure" every night at 7 p.m., you can find Evelyn Connors practicing her tap in the Rec Center, or chatting with customers at the Grand Canyon Dinner Theatre, her place of work as well as her temporary home.

An assumption that couldn't be further from the truth.

"I've done singing telegrams in college. For a while, when I lived in Las Vegas, I was a Marilyn Monroe impersonator for photos. People don't realize that being an actor doesn't mean everyone wants to be on TV or on Broadway," she explained. "You have to look for opportunities to do what you love that might not be what others expect you to be doing."

And getting involved with the Grand Canyon Dinner Theatre was just the opportunity she was waiting for. At the time, Connors was living in Las Vegas when she got a phone call about a 'gig at the Grand Canyon she'd be perfect for.'

"It was just one of those things, it was theatre kismet. Perfect place, perfect time," Connors said.

With an apartment just upstairs from the dinner theater, Connors considers her new living quarters ideal instead of claustrophobic, and her only playful jab at the situation is aimed at the over enthusiasm of the late night karaoke singers.

"It's fun for everyone because all the actors are transplants," Connors said, who recently signed on as theater manager along with performing, mainly because she simply loves being in Tusayan.

"I've lived a lot of places and there are awesome things about anywhere you live, and there are going to be drawbacks," Connors said. "Here, the only major drawback is that I really have to make sure I make up a shopping list before I go to Flagstaff. Everyone here is just super nice and willing to tell you the secrets of the Canyon and show you around."

"I think I got into acting because I moved so much as a kid," Connors said, who attended 13 different schools before entering college. "I got really good at interacting with people, meeting people quickly, because if you are the new kid, you're either funny, or you're alone at lunch. Naturally that just led to theater."

Initially, the young soprano enrolled at Chapman University, because it was "close to Disneyland," but her education eventually led her to Citrus College Musical Theatre Conservatory in Los Angeles otherwise called in the performing world as Citrus Singers.

"It was make or break. It was ruthless," Connors said. "You got very disciplined and you grew up very fast."

After graduating and performing for a couple years, Connors ventured across the Atlantic, enrolling in the London School of Musical Theatre for her postgraduate education in 2007.

"Before that, I came from an extremely disciplined program, and the funny thing I learned in London that, for some reason, British people think Americans are very disciplined and work too hard," she said, explaining that life with Citrus singers involved early wake up calls, regimented choral rehearsals, and not talking in class, among other rules.

After six months performing for a mixture of locals and Grand Canyon visitors, Connors considers the show a completely new experience to opening night.

At the moment, Connors is gearing up for the Christmas season, with a new show she is styling after the interactive, traditional pantomimes she enjoyed while in the U.K.

"They are silly, quick, and some require audience participation," she said. "It's a lot of fun, all ages and great for the family."

See Connors and the rest of the talented cast of "Miss Kitty's Grand Adventure" every night at 7 p.m. at the Grand Canyon Dinner Theatre, located on Highway 64 in Tusayan. For more information, visit www.grandcanyondinnertheatre.com or call (928)638-0333.