Students explore the mystery of the Canyon's past 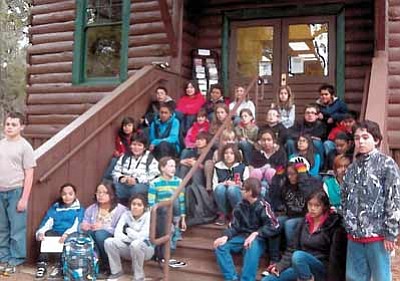 Above, students sit on the steps of the Bright Angel Hotel during a recent field trip. Below, sixth graders take a break from exploring the mystery of Grand Canyon’s past at the South Rim.Submitted photos

On Nov. 15, the sixth grade classes from Grand Canyon Unified School District went on a field trip to the rim of the Grand Canyon. The program is called "Pictures from the Past: Exploring the Mystery of Grand Canyon's Past."

The students stopped along the way to guess what some of the buildings were used for in the old days. They were surprised by the new information they learned along the way.

Once the students were in front of the Bright Angel Hotel, they looked at a picture from the past and talked about what had changed since then, including transportation, clothing and the physical features of the building.

The students formed two groups and were each assigned a picture from the past (about 1898-1920). Their assignment was to find the exact spot where someone had taken the original picture and then take a picture that day that matched it exactly using people and cars.

Once the students took the pictures on a camera and an iPad, they wrote in journals and answered questions about the stops. The students had four stops to complete before they had a reflection time. They were excited to be out on the rim and learn so much history in their own area.

In two weeks, the groups will create PowerPoint presentations about their experiences and present it to families and the rangers who attend. The teachers and students want to thank the rangers and parent chaperones who participated, and hope to go back to the Grand Canyon again soon.