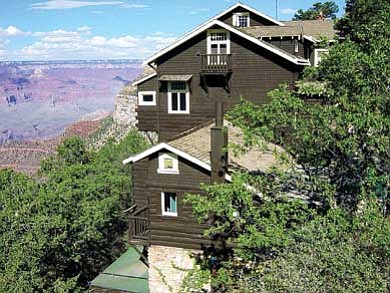 Kolb Studio sits precariously on the edge of the South Rim. Tours inside the residence are now available. Ryan Williams/WGCN<br /><br /><!-- 1upcrlf2 -->

GRAND CANYON, Ariz. - Brothers Emery and Ellsworth Kolb liked living life on the edge. Not only did the adventurous brothers explore the Grand Canyon before it was a national park, but they also built their photography studio and home right into the wall of the canyon.

This winter, the National Park Service is offering tours of the residence, providing people with an up-close look at how the brothers lived.

The Kolbs, originally from Philadelphia, started building the structure in 1904. The Grand Canyon did not become a national park until 1919. The building would serve as their photography studio. Through photography, the brothers documented several important visitors to the Grand Canyon, including Teddy Roosevelt.

"The architecture of the house is a little unusual because it was built right into the side of the canyon," said Libby Schaaf, supervisory park ranger with Grand Canyon National Park. "It has many different levels to it that aren't immediately apparent when you walk into it."

That's because the brothers gradually expanded the house and studio until 1926. Today, it is a five-story building with 23 rooms. Aside from the living space, the building now contains an exhibit space, information center and bookstore.

The one-hour guided tours start in the auditorium and continue into the private residence of the Kolb brothers.

"People will learn about the role the Kolb brothers played in the early development of the Grand Canyon," Schaaf said.

The Kolbs were the first to travel down the Colorado River with a motion picture camera in 1912. They showed the movie they made from 1915 to 1976 in the studio.

"It was really something that helped publicize the Grand Canyon and raise awareness of the whole country to what a spectacular place this was," Schaaf said.

People who take the tour will see the living room, dining room, bedrooms, parlor, an unusual bathroom and the photography workshop. The house contains some original pieces of furniture from when the Kolbs lived there, as well as some replicas of furniture from that time period.

"It's a beautiful house," Schaaf said. "You can see from touring the residence why the Kolbs loved the Grand Canyon and put down roots and stayed there so long. They had a fantastic view from their window."

The Grand Canyon Association has helped restore the studio by refinishing the floors and painting the walls. But the most important restoration to the house stemmed from a structural engineering survey in the 1990s, in which workers solidly attached the building to the side of the canyon.

Erin Clendening said she gained a new perspective on the house and the Kolb brothers.

"I enjoyed stepping back in time and learning more about the eccentric and adventurous Kolb brothers while touring their historical oddity of a house that literally clings to the canyon's rim wall," she said after touring the residence. "I was enthralled by the sunny bedrooms and enclosed front porch that featured huge picture windows framing the ever changing, priceless and dramatic views of the Grand Canyon."

A limited number of people are allowed to tour the house in order to preserve it. The daily tours start at 1:45 p.m. and are available from Dec. 1 through the end of February. The tours are free, excluding entrance to the park.

Those interested in taking the tour can sign up with the Kolb Studio at (928) 638-2771. More information about Kolb Studio is available at www.grandcanyon.org/kolb.